The Tsar of Love and Techno by Anthony Marra 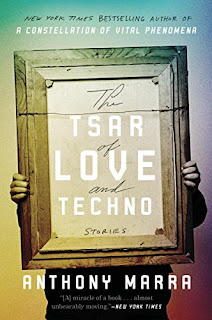 Short stories generally aren't my genre. I like my characters to have the chance to develop. And so, despite having loved Anthony Marra's "A Constellation of Vital Phenomena," I was resistant to reading his "The Tsar of Love and Techno." But weeks after finishing this collection, I am still marveling over these intertwined stories. A big thank you to my friend Althea, who put this book in my hands.

The book starts with an intriguing epigraph: "It's a minor work." The quote is attributed to Pyotr Zakharov-Chechenets regarding his 1843 painting Empty Pasture in Afternoon. While Zakharov was a real Russian artist of Chechen descent, no such painting ever existed. But the role Empty Pasture plays in story after story made it as real as any painting on the walls of my home. Such is the power of Marra's writing.

Marra's first story -- "The Leopard" -- introduces us to Roman Osipovich Markin, an employee of Russia's Department of Propaganda and Agitation. He is a "correction artist," whose job it is to modify paintings and photographs to remove evidence of those who have fallen out of favor with the State.

"Last July I had the opportunity to correct one of my own paintings," Roman tells us at one point, "A scene of the October Revolution oiled a decade ago, in 1927. Amid an ardent proletariat uprising, I had mistakenly included the figures of Grigory Zinoviev and Lev Kamenv, who couldn't have been there, not after having been proven perfidious in a recent public trial  I replaced our villains with our hero; Stalin was there, is there, is everywhere..."

Roman is a villain in his own way. When removing evidence of the existence of dissidents, he often inserts an image of his brother in their place. It's a dangerous--and traitorous--action. His brother, you see, was executed after being found guilty of religious radicalism for his belief in the existence of heaven. While this sly act of treason isn't what trips Roman up in the end, it does create a trail of breadcrumbs for another character to follow.

In "The Granddaughters," Marra moves from Leningrad to the Ukrainian city of Kirovsk. We meet Galina, a character whose claim to fame is a grandmother who was a prima ballerina with the Kirov. Sadly, Galina didn't inherit her grandmother's talent. But her great beauty becomes her own passport to another world.

We also meet Kolya, a character about whom Marra says, "If we could we would airbrush him from our story....Kolya was a hundred meters of arrogance pressed into a two-meter frame, the kind of young man who makes you feel inadequate for not impressing him...In another country, he might have grown up to be an investment banker, but here he grew up to be a murderer..."

The two fall in love, with their lives crossing paths repeatedly in later stories. Trust me when I say this is no ordinary love story.

Each story in "The Tsar of Love and Techno" is a gem. But it's the way the stories build on one another that makes this book so extraordinary. I was torn between racing through it and savoring each story. I wanted to read it again as soon as I had finished. I want to read it again now that I've been paging through the stories. In case I've left any question, I loved this book.

For some insights from Marra into the book and his writing process, click here to read a terrific interview. (I particularly enjoyed learning about the epigraph.) If you're still on the fence about the book, this should catapult you right into your nearest bookstore to grab a copy. Don't overlook the mixtape playlist Marra put together that appears after the reader's guide. It's a marvel in and of itself, a bonus story of sorts -- and you can listen to it on Spotify.