"I dropped out of Emerson after one and a third semesters."  So began author Dennis Lehane's address to the Emerson graduating class of 2017. "I suspect the people who invited me to give this address didn't know that," he continued. "It's kind of like swiping left but ending up hooking up anyway."  With this hip intro, Lehane had the graduates--many of whom were not familiar with his work--and the audience in the palm of his hand.

Lehane's address was personal, political and aspirational. He talked about growing up in a working class Dorchester neighborhood with a father whose greatest hope was that his son would find a steady job working for a utility. (It wasn't until Lehane's fifth book was published that his dad stopped sending him info about upcoming post office exams.) He shared that his father worked for 35 years for a national company and retired with a pension and health benefits. His dad was bewildered as his former employer chipped away at the benefits he'd worked so long and hard to earn. Lehane's offer to finance a lawsuit against the company was a wake-up call to his father that "the system is rigged in favor of people of means."  What about all those retirees who didn't have a rich and famous son to help them?


Lehane urged the graduates to think about who benefits from government policies. He told a story about a man diagnosed with lung cancer whose doctor told him his only hope of survival was to immediately stop smoking. The man protested; he had a vacation coming up and couldn't imagine going without his beloved cigarettes. Cancel the vacation and stop smoking, the doctor told him. The man consulted 98 other doctors, all of whom told him the same thing. Finally, he found a doctor who told him it was fine to keep smoking. In fact, he should switch to unfiltered cigarettes. And enjoy his vacation. Within a month, the man's cancer had advanced to a debilitating stage as he bemoaned that nobody had told him this would happen.

This story, Lehane said, is a metaphor for climate change, with the deniers starring in the role of the smoker. "It's not my issue," Lehane said. (He has a long history as a counselor for intellectually disabled and abused children.) "But it's so cut and dried. Ask yourself who benefits from denying climate change. Nobody benefits from fighting the deniers. The side without the benefits is fighting from a purer place." 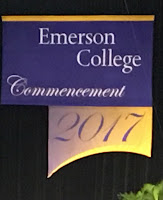 Lehane talked about the "myths and narratives of the glorious past" that some politicians are trying to resurrect. In Lehane's experience, although that past did have its good points, racism and sexism were the norm. He fears this longing for the past is leading us to become a nation without empathy. He shared a comment he overheard walking down the street recently when a couple passed a homeless man asking for change. "He should die or get a job," the passerby said to his companion.

Lehane exhorted the Class of 2017 to fight to make the world a better place. "I'm not the hope. Your professors aren't. I'm Ned Stark. YOU are the hope."

"The world can change," Lehane said, "But not without you. Love who you want. Drink clean water and breathe clean air. Fight for free speech and a free press. Embrace the best of ideals over the worst of your fears. Most of all, get off your asses and vote. YOU can change the world."
at May 17, 2017