The Ann Norton Sculpture Gardens are a testament to the love of Ralph Norton for Ann Vaughn Weaver, his second wife. Norton was President of the Chicago-based Acme Steel. During his tenure, Norton and his first wife Elizabeth amassed an enviable art collection. In 1940, the couple moved to West Palm Beach, a more hospitable climate for Elizabeth's failing health. In addition to renovating a gorgeous home on what is now the Intercoastal Waterway, the couple established the Norton Gallery and School of Art. (The institution still exists today as the Norton Museum of Art.)

Every school needs instructors, and Weaver applied to be a sculpture teacher. Her impressive resume included participation in group shows at MOMA and the Whitney Museum of Art and two Carnegie Traveling Fellowships. She joined the Norton School of Art in 1942.

Ralph and Ann became good friends. Following Elizabeth's death, their friendship deepened, and Ralph asked Ann to marry him. She declined, although not because of their 30 year age difference. Instead, she told him she was already married -- to her art. He sweetened the deal with the offer of a beautiful studio. I suspect he might have also mentioned that the grounds of their home would be a beautiful location for her large-scale works. But Ann didn't say yes until Ralph agreed that she could continue to focus on her art rather than serve as a hostess for West Palm Beach society. By all reports, the couple's five year marriage--cut short by Ralph's death--was a happy one.

In 1977, Ann established a foundation to ensure the preservation of the Nortons' home, studio and sculpture gardens. Today, the Ann Norton Sculpture Gardens showcase Ann's work and host traveling exhibitions. During my recent visit, The Lost Bird Project and 'Rising' The Mystical World of Sophie Ryder were on display.

In his Lost Bird Project, sculptor Todd McGrain memorializes five extinct North American birds -- the Labrador Duck, the Great Auk, the Heath Hen, the Carolina Parakeet and the Passenger Pigeon. In an interview with Smithsonian.com, McGrain shared the genesis of the project. He was working on an abstract sculpture based on the form of a duck when he was introduced to Christopher Cokinos' Hope is the Thing with Feathers. The book--whose title comes from an Emily Dickinson poem of the same name--tells the stories of extinct birds of North America. The idea of these lost birds struck a chord with McGrain. He spent the next ten+ years creating his human-sized sculptures to reintroduce these birds to the world and encourage people to talk about conservation. "Forgetting is another kind of extinction," he says.

But McGrain's vision was not complete until the sculptures had been installed in locations with a connection to their places of extinction. The project became the subject of a documentary available on Amazon. To watch the trailer, click here. (The full film is well worth spending an hour -- and $3.99 -- to watch.)

Replicas of each of the "lost birds" are on display at the Gardens, along with some of McGrain's drawings and Audubon prints of each species. The bronze sculptures beg to be stroked, which is exactly what McGrain intended.

McGrain's website is full of information about the Project and can be reached by clicking here. His interview in Smithsonian.com can be found here. 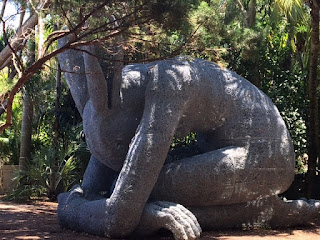 The Mystical World of Sophie Ryder provided quite a contrast to McGrain's birds. As I was strolling through the Gardens, I turned a corner and came upon Ryder's larger-than-life wire sculpture of Lady Hare. Ryder devised her creature as a companion to the half human-half animal minotaur. In Greek mythology, the minotaur is characterized as aggressive and violent. But with Lady Hare at his side, he becomes protective and loving.

Their bodies of Ryder's hare and minotaur are based on the figures of Ryder and her husband, respectively. Her sculptures vary in size from this monumental Lady Hare to human-sized works to intimate works appropriate for display on a tabletop. They are constructed from widely different materials, including wire, bronze, and marble. According to Ryder, her years of working with her hands have nearly eliminated her ability to make fingerprints.

I wasn't quite sure what to make of Ryder's work. While interesting and creative, they didn't evoke an emotional response in me. Perhaps if I were better-versed in mythology, the narratives behind the figures would have spoken to me more clearly.  Regardless, I enjoyed discovering the sculptures tucked away in the Gardens and studying the smaller works in the studio.

To read more about Ryder and her work, click here.

Both McGrain's Lost Bird Project and 'Rising' The Mystical World of Sophie Ryder are on display at the Ann Norton Sculpture Gardens through the end of June.