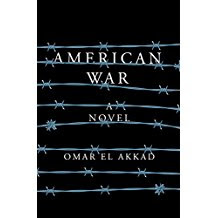 Omar El Akkad did not get the memo that climate change is fake news. The prologue to his post-apocalyptic American War sets the scene as our narrator describes old postcards from his collection. (Note: The book takes place in the latter part of this century.)

"My favorite postcards are from the 2030s and 2040s, the last decades before the planet turned on the country and the country turned on itself. They featured pictures of the great ocean beaches before rising waters took them; images of the Southwest before it turned to embers; photographs of the Midwestern plains, endless and empty under bluest sky, before the Inland Exodus filled them with the coastal displaced. A visual reminder of America as it existed in the first half of the twenty-first century: soaring, roaring, oblivious."

Our narrator is a historian and tells the story of the Second American Civil War--prompted by the Free Southern State's refusal to abide by laws banning the use of fossil fuels--from his home in New Anchorage. (Many cities have old and new locations due to the effects of both climate change and the war. The nation's capital is now located in Columbus, Ohio.)

Despite the set-up, American War isn't a book about the fragility of our environment. It's more a cautionary tale about the potential impact of deep divisiveness within our country. 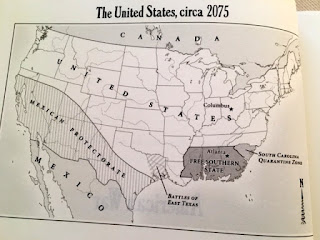 When we meet Sarat, she is a six-year old living with her family in a corrugated steel container somewhere in the Free Southern State. Mississippi, Alabama and Georgia have seceded from the Union, you see, and established a stand-alone nation that relies on the charity of foreign superpowers to survive. But that's not the only change to the United States as we know it. South Carolina is a quarantined land. Louisiana, Arkansas, Tennessee and North Carolina are suspect members of the Union due to their sympathy for the Free Southern State. And a portion of the Western U.S. is now under Mexican control. The situation causes Martina, Sarat's mother, to think "how much easier it would be for everyone if all these would-be statelets were simply allowed to break free from the Union, to form their own miniature nations along the fault lines of region or creed or race or ideology..."

Sarat's father Benjamin is heading off to an interview for a job in the North that would come with a permit for his family to move to a safer place. But it's not to be, and the family is soon living in a refugee camp.

As the children grow up, Sarat's twin sister Dana tries her best to be a "regular" girl. But Sarat and her brother Benjamin are deeply affected by their environment. Benjamin begins fighting with the rebels. Sarat becomes radicalized under the tutelage of Gaines, a charismatic figure able to travel easily in and out of the camp. Ultimately, American War becomes a tale of revenge.

If the story sounds complicated, it is. Summaries from history books and memoirs and other papers documenting the era are interspersed throughout the novel to return the reader to what was happening in the larger world. I flagged some of the excerpts and periodically returned to them when I lost track of the timeline.

And if the story sounds frightening, you've got that right too. But it might not be as far-fetched as you'd hope. Author El Akkad drew on his own experiences growing up in the Middle East and working as a war reporter when writing the book.

He continued: “The notion was to take all of these wars that I’d grown up seeing—the Israeli-­Palestinian conflict, the wars on terror, even cultural events like the Arab Spring—and recast them as something very direct and near to America. The idea being to explore this notion that if it had been you, you’d have done no different.”

American War isn't easy bedtime reading, and it certainly isn't for someone looking for an escape from our divisive political climate. But it's powerful and feels like an important book in today's world.  Read it.

For the entire BookPage interview with El Akkad, click here.