The Story of Mount Dora

Once upon a time, a trio of storytellers made an appearance in Punta Gorda on their "Uncalled for Christmas Tour." It was a wonderful evening that planted the idea to check out the annual Florida Storytellers Festival in Mount Dora. Bruce and Dorrit joined me as part of their mission to explore our home state. It was a laughter-filled week-end.

Each evening of the Festival featured five storytellers representing a different aspect of the craft. Windell Campbell's stories were an animated version of folktales that reflected his many years as an elementary school teacher. A three time winner of the Florida Liar's Contest, Pat Nease told outrageous stories that had the audience doubled over with laughter. Lyn Ford is an Afrilachian storyteller whose tales tugged at our heartstrings.

The group was rounded out by Tim Lowry and Jessica McCune. Lowry is a South Carolina Southerner through and through (and wore a Mark Twain-esque seersucker suit and bow tie to make the point). One night he told a story in Gullah, a Sea Island Creole language. While creative, it required way too much concentration to appreciate despite his preparatory translation of "Mary had a little lamb."

McCune began each of her tales with a catchphrase that provided the moral of the story. I loved hearing her story about the danger of expectations. She shared her experience as a docent to a group of Webelos at the Dallas Museum of Art. (In case you don't know, Webelos are third and fourth grade boys in between Cub Scouts and Boy Scouts.) She was dreading spending an hour with a group of rowdy kids who would have no interest in art. As it turned out, the kids had done their homework and were one of the must enthusiastic -- and well-versed -- groups she's ever led. 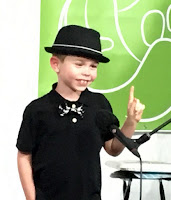 My favorite storyteller, though, wasn't one of the featured performers. Instead, it was the "young voice" of a seven year old who learned at the knee of Mr. Campbell.  I am not exaggerating when I say he had the audience in the palm of his little hand as he shared Mo Willems' "Goldilocks and the Three Dinosaurs."  It makes me smile to remember.

Of course, there's more to Mount Dora than storytelling. It's a very quaint lakeside village, with lots of shops to explore. Happily, I was traveling with my own videographer, who captured our travels.  (Click here to see the video produced by Bruce--aka Intergalactic Photography.) 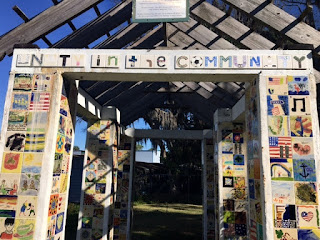 We enjoyed walking around and taking in the sights. There was a regatta going on that day, and the lakefront was filled with small boats with colorful sails. There's a lighthouse and a boardwalk.  We stumbled upon the lawn bowling club (circa 1920s) whose members eagerly shared their love of the "sport" with us. And of course I liked the "Unity in the Community" arbor covered with tiled art.

Not surprisingly, we ate well during our adventure. I was excited for our breakfast at the Magical Meat Boutique based on the name alone. Our friendly waiter had an authentic English accent, and the menu came with a supplemental page entitled "Our Breakfast Items Explained!"  When we got our selections, though, we remembered there's a reason England isn't known for its food. Still, it was fun. And any culinary disappointment was more than offset by our incredible dinner at the bar at The Goblin Market Restaurant, a great space that nestles you in an old style library.

In case you're wondering, Mount Dora got its name in a round-about fashion from Dora Ann Drawdy, one of the town's first settlors. Ms. Drawdy's hospitality was so enjoyed that the surveyors responsible for naming the town's lake called it Lake Dora. At the time, the town was known as Royellou, a combination of the names of the first official postmaster’s three children - Roy, Ella and Louis. In 1883, the town was renamed Mount Dora in recognition of the notable altitude of the town -- 184 feet above sea level. We are talking Florida, after all.