Five Things I Learned in Jackson


It's still a bit of a mystery how one conversation with a friend about art in Jackson, Mississippi morphed into Maggie and me heading there for a bridge tournament, but that's how it went down. And while we didn't have any noteworthy art experiences, it was a fun time.

Read on for five things I learned during our adventure.

1) Mississippi is the Deep South -- and the people there have the manners and accents to prove it. In my four days there I was called "ma'am" more times than cumulatively in my life to date. But all that graciousness made me a bit nervous after my years in New York.  I kept recalling Celia Riverbark's books with titles like, "Bless Your Heart, Tramp!" Seriously, can people really be that nice?

But Southerners can be unexpectedly off-color, too. Without going into too much detail about the etiquette of playing bridge, suffice it to say that you shouldn't touch other people's cards. When one character laid his cards down overlapping, I reached over to separate them so we could see his holdings. "Keep your hands off my dummy -- until later," he said.

Then there was the extremely crotchety old woman who spilled a glass of water while at the table. The director came over with paper towels and got down on the floor to clean the mess up. "If you're going to be on the floor," she muttered, "I'd rather have you in front of me doing something else."  Really, I could not make this up.

2)  Jackson should be a culinary destination -- Maggie remarked to some people that she had hoped to eat healthy on this trip. They laughed, saying, "You're in the South!"  Sure, we had been expecting some good BBQ, but the deliciousness extended far beyond the stereotypic Southern meal. The tableside guacamole at Babalu -- not to mention the redfish -- was so yummy we ate there two of our three nights. And despite its name, Walker's Drive-In is a fine dining experience. My BBQ oysters with brie and slaw and BLT wedge salad with lump crab meat were to die for. And Maggie's redfish with lump crab meat was a dish to remember. 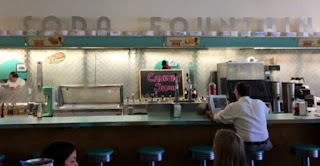 3) Dining with "The Help" -- We were conveniently staying near the Fondren area of Jackson, which is full of cute shops and restaurants (including Babalu and Walker's Drive-In). While chatting with some locals, I learned that Brent's Drugs in Fondren was used as a location for "The Help." Needless to say, we stopped into the old style soda shop for lunch one day. (For people in the know, there's also a speak easy of sorts with hand-crafted cocktails through a door at the back of the diner.)

4) Watch where you're driving -- Jackson's streets must surely be among the worst maintained in the country. The potholes are ridiculously deep and could easily claim an axle on your car. Some of the first locals I talked to asked if I had lost any teeth yet driving around. Our waiter at Walker's laughingly said that people who've imbibed a bit too much drive straight on their way home from a night out while sober people veer all over the place. He also explained that the problems derive from a combination of underground water pipes perpetually breaking without being properly repaired and the yazoo clay ubiquitous to the region. 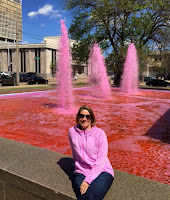 5)  Color me pink -- I have no explanation for the pink fountains outside a Jackson performing arts center. Nor could we figure out how the orange and pink dyes managed to stay separate or why they pooled in different areas. But I'm always on the look-out for the unexpected. Besides, how could I miss this photo opp given how well the fountains complemented my jacket?

While Jackson wasn't my favorite all-time destination, Maggie and I had a great time. It's always fun to explore a new place with a good friend.

Stay tuned for a post about a more somber experience during my time in Jackson -- a visit to the home where NAACP Field Secretary Medgar Evars was assassinated.