We Love You, Charlie Freeman by Katilyn Greenidge 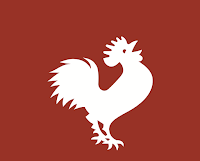 The Tournament of Books (ToB) is underway once again, compliments of The Morning News and Field Notes. Organizers refer to it as "a month-long battle royale among the year's best novels." They quickly back pedal a bit, though, saying, "But it’s not really a contest. We’re not even sure it’s a 'tournament.' What the ToB has been and will be, as long as we’re putting it on, is a month-long conversation about novels and reading and writing and art that takes place on weekdays in March." The winner is awarded this year's coveted Rooster.

However it's characterized, the ToB is fun to follow.This year's short-list of 16 (or so) books included many I had already read, including The Nix, Homegoing and Underground Railroad. Then there were some books that I'd given the old college try to read, but had given up. (The Vegetarian and Sweet Lamb of Heaven fell into this category.) That left a few books with which I was unfamiliar.

After discarding a couple out of hand based on off-putting descriptions, I checked the others out from the library. Last year's ToB was, after all, how I found Chris Adrian and Eli Horowitz' crazy The New World (which I loved and nobody else seemed to even like) and Kent Haruf's lovely Our Souls at Night. 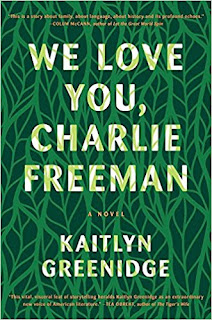 Which brings me to one of this year's contenders -- We Love You, Charlie Freeman by Katilyn Greenidge. The description of the book piqued my interest with its story of the Freemans, an African-American family that decides to participate in a study at the Toneybee Institute in rural Massachusetts. They move to the Institute, where they are introduced to their new family member -- Charlie, a young chimp abandoned by its mother. The family brings fluency in sign language to the project, and their job is to teach Charlie how to sign. But of course it's not as straightforward as that.

The book moves between the present, with various family members narrating the action, and 1929, with Nymphadora of Spring City as our protagonist. The characters share a connection to the Institute.

The Freemans' story is hard to explain, much less in a concise manner. So I'll settle for telling you how the family came to know how to sign.

Laurel, the Freeman matriarch, grew up in Maine as an only child in a family officially designated as the northernmost Negroes in the United States. Her family's tree farm was given the sole entry for the State of Maine in The Colored Motorist's Guide to America (a book I first heard of last year in the play "Alabama Story.")

Laurel learned to sign after the Hallelujah School for the Colored Deaf came to the farm. She was fascinated with the expressiveness of their hand movements.

"She [Laurel] was no longer adrift in Farragut, Maine," Greenidge tells her readers. "She had discovered a universe where silence wasn't cold and stony but warm and golden, where there was no need for speech. Signing was full. Signing made words important. It was beyond condescension or awkwardness or fear or loneliness. It wasn't avoidance or dismissal. It was, as far as Laurel was concerned, the perfect language."

Her children, in turn, learned the skill when they were growing up. Until they moved to the Institute, they primarily used sign language to talk behind their parents' backs.

The family's time at the Institute is filled with complicated interpersonal dynamics, both inside the family and in a world in which they are outsiders. Their story is interesting and unsettling and thought-provoking.

But it is the story of Nymphadora that continues to haunt me. When we first meet Nymphadora, we learn that, like her mother before her, she was a Star of the Morning. (Her given name was Ellen, but she liked her chosen religious name much better.) Her parents committed suicide when she was a girl, leaving her to find her own way in the world.

She became a teacher, which is how her path crossed with that of Dr. Gardner of the Toneybee Institute. Gardner was lurking around the school at which Nymphadora taught, sketching pictures of the children. It fell to her to ask him to stop.

"I am an anthropologist and I enjoy studying all people. The [African-American] people of Spring City are excellent specimens," Gardner told her. Upon seeing her face, he tried to explain.  "If you are familiar with the science of anthropology, you can see why I would want to draw your students."

"Yes," she responded. "And I can see why I shouldn't allow it. I don't want them ending up somewhere in some study, examples of Negro buffoonery, like you scientists like to do. I won't have them studied, if that's what you want to call it."

They get into a discussion in which Nymphadora tells Gardner that similar studies have already been done. In fact, a picture of her as an Infant Star was included in W.E.B. Du Bois' Exhibit of American Negroes at the Paris Exhibition. Gardner takes note of her pride at having been included in the exhibit. Perhaps, he suggests, she might like to take the place of the children as his subject. One things leads to another, with disturbing consequences.

We Love You, Charlie Freeman is a book that has lingered with me. It is well worth adding to your reading list.

Sadly, though, I can't root for We Love You to advance in the ToB. It is up against my favorite book of 2016, The Nix by Nathan Hill. It will be interesting to see which book comes out on top.

For more about the Tournament of Books, including this year's brackets, click here.  Happy reading!