The annual Sarasota Creators & Collectors' Tour is always great fun. I love getting a chance to peek into artist's studios and chat with them about their work. Dorrit's as keen as I am, so she's the perfect partner in crime.

Our first stop was the Galleria at the Ringling School of Art + Design, where an assortment of artists were gathered. Although we methodically worked our way around the room, I had my eye on Raven Skye McDonough from the moment we walked in. I am familiar with Raven's collages from a couple of shows she entered at the Visual Arts Center. As she likes to say, she "paints with paper." She often incorporates her own handmade paper and photographs into her work.

I particularly loved this colorful collage (whose name I neglected to note). Raven shared that her inspiration was the bust of a Roman emperor she had seen in the St. Petersburg Museum of Art. If you look closely, you'll see that the eye of the "emperor" is the head of a nude woman, so he's seeing things from a female point of view. Clever. To see more of Raven's art, click here.

In the nearby gallery Made By--which exclusively shows work by Ringling students and grads--we enjoyed Louis Miller's "The Art of Shoes." There were a number of paintings of shoes on display, but I was more intrigued by the 3D works.  There were shoes made from wire and corrugated cardboard and other types of paper, including a roll of tickets. While chatting with Miller and his wife, she mentioned he had kept these tickets since he was nine years old, somehow knowing they would become useful someday. We also learned that she's the one with the shoe fetish, which I suspect he doesn't discourage.


From there we were off to the artist studios. When we first entered Lucy Barber's studio, I wasn't sure about her subtle paintings. I tend to go for artwork with color that hits me over the head. But the more time I spent with them, the more I liked them.

In fact, I'd go so far as to say I fell in love with her "kitchen shelf" series. The inspiration for the series came from the light that fell on, yes, a kitchen shelf with five of her father's WWII journals on it. The kitchen walls were painted yellow and, she says, "glowed" when the morning light filled the room. Her works capture this feeling beautifully. For more of Barber's work, click here. (I'm really drawn to the radishes, too.)

Two of the participating artists were located east of 75, territory into which I'd never ventured. Their studios were definitely worth getting off the beaten track to see.


As people who go to galleries with me know, I sometimes break into a jog when I see a work of art I must get to immediately. (I know--it's not a pretty image.)  And so it was when I laid eyes on Camera Man by Duncan Chamberlain. Seriously, how could you not love a larger-than-life sculpture made from old cameras?

Duncan came to his art naturally.  His father, John Chamberlain, was a renowned scrap metal auto part sculptor. (This explains the multitude of bumpers lying around Duncan's studio.)  He worked as his father's assistant for a number of years, cutting, welding and fabricating parts. And then it was time for him to strike out on his own. In addition to Camera Man and some other whimsical works, Duncan's yard is peppered with some beautiful aluminum sculptures that I could envision in my friend Maggie's own sculpture garden. 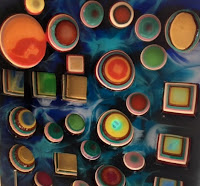 Last, but definitively not least, was Andrea Dasha Reich. Walking into her studio is a jaw-dropping experience. Her vibrant, large scale art takes over the massive space. It was hard to know what to look at first. Luckily, Dasha was on hand to provide an explanation.

Although Dasha is Czech, her medium is not glass. Instead, she calls herself the Queen of Resin. She likens works such as the one shown here to a BLT sandwich, although a club would be more apt given the number of layers. When you see this piece from the side, you can appreciate how painstaking an effort it must have been to create. It's also a rather toxic process that requires gloves and a mask.


Dasha's latest work is her Fusion series. The base of each work is a photograph of one of her paintings printed on canvas. She then layers on paint, resin and resin pieces to create a totally new work so expressive it nearly vibrates.

Click here to see more of Dasha's striking work (and a glimpse of her studio, which you can find if you scroll through the photos ). If you are in Sarasota, Dasha has an upcoming show at Alfstad & Contemporary, which opens April 7th. Her work can also be seen in State of the Arts Gallery, a truly fabulous gallery that features the art of more than 35 contemporary artists.
at March 18, 2017