It seemed like hyperbole when an organizer told me that attending Greek Fest was like going to Greece for the week-end. Admittedly, I'm not the best judge, since I've never been. But the outing seemed like a pretty good facsimile to me (absent, of course, the Aegean Sea).

The Fest is organized by the Holy Trinity Greek Orthodox Church in Port Charlotte. Craftily, visitors are funneled through a tchotchke area when they arrive. Bruce made a beeline for the fisherman's caps. I bought a colorful headband of plastic flowers that dug into my forehead and gave me a headache. (It WAS festive, though!)

With our shopping done, Bruce, Dorrit and I headed off to check out the desserts. We felt like kids in a candy shop as we surveyed our options. Of course there was baklava (and baklava cheesecake and, in another location, baklava sundaes). But there were other exotic treats as well, like galaktoboureko (flavored custard baked in phyllo) and loukoumathes (Greek honey donuts).  Properly sustained, it was time for Dorrit and me to take some dancing lessons.


Dorrit and I quickly picked up the steps to our dance, known as the hasaposerviko. We proved proficient even when executing the "gyro," which is a turning move. (We tried to figure out why it's also the name of a sandwich. Maybe because it's rolled?)

The Pride of Greece Dancers were decked out in elaborate traditional garb. They ranged in age from three years old to just out of college. They were amazing. The older dancers moved fluidly around the dance floor, with their instructor periodically yelling out a celebratory "Opa!"

The little ones were too cute for words. Often the dances just called for them to hold hands and circle their way around the dance floor (with more experienced dancers leading the way). They were, however, sometimes called upon to sing and do some more advanced dances -- like the hasaposerviko.  Dorrit and I wanted to join in.

Throughout the dancing, audience members would run up and shower the dancers with dollar bills. This is a traditional way of showing appreciation for the performance. At the end of the number, the dancers picked up the money and put it in a donation bucket.

When the dancers took a well-deserved break, it was time for the grape stomping. Needless to say, Dorrit and I were first in line to participate. 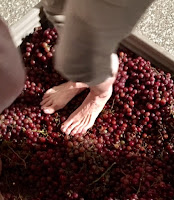 A crusty old guy had the job of washing and drying our feet before we stepped into the grape stomping box. As we squished the grapes, we danced around as much as possible given the tight space. We were exhorted to stomp harder because no juice was coming out of the spigot. Eventually, enough juice flowed to fill a small glass that some of the organizers actually drank. When it was time for other women to have their turn, our feet were washed and dried again, and we slipped back into our shoes.

Having worked up an appetite, we headed off to get some real food. It was hard to decide what to eat. Moussaka? Souvlaki? Tyropita?  Bruce and Dorrit decided on keptedes, or Greek meatballs.  I opted for some roasted chicken with Greek spices. It was all quite delicious.

Greek Fest will be celebrating its 25th anniversary next year.  I will definitely be back.
at February 25, 2017