I spend a lot of time trolling for local outings for my column in Florida Weekly. But with calendars so tight this time of year, I often don't get to the events that have piqued my interest. Happily, I made it to not one, but two, concerts this week. They couldn't have been more different from one another -- and they were both great fun.

First up was "Married to Broadway" with Ron Sharpe and Barbra Russell at Burnt Store Presbyterian Church. I'll say upfront that it wouldn't have been my first choice of venue.But the sanctuary holds a lot of people, the seats are reasonably comfortable, and the sound is pretty good. It was standing room only, with my friends Donna and Pete Smart and I getting three of the last five tickets.

The title of the show comes from the way Ron and Barbra met. In the 1990s, Ron played Marius in "Les Mis" on Broadway. (He also was cast as Jean Valjean in the 2010 revival of the show. He is the only actor to have played both roles on Broadway.) Along the way, Barbra took on the role of Cosette. After getting married onstage more than 1,000 times, they decided to do it for real.

In Married to Broadway, the couple--with their 21-year-old daughter Samantha, Jim Petro and Andre Williams--bring the best of Broadway musicals to stages across America. From the first moment their voices filled the church, I knew they were the real deal.

It was a totally feel good show, with too many great songs to mention. There were numbers from "West Side Story" and "Guys and Dolls" and "South Pacific." It was no surprise that "Les Mis" was heavily featured. Samantha sang "I Had a Dream." (She definitely has her parents' musical genes.)  And the five took on the 40-some person finale to the show with great success.

But the number that keeps coming back to me is the theme song from "Phantom of the Opera." Their rendition was amazing, as Barbra hit every single note. Ron later said the highest note is often played from a recording. No technology was necessary for the Punta Gorda show.

The Girlz Rule house concert was about as different a musical outing as you can imagine.

Sam and Gina Densler moved to Punta Gorda a few years back and started Songwriters Island Radio, an internet radio station. Bringing performers to our area is a natural offshoot of the business.

Their groups are often found at Hurricane Charley's or the Nav-a-Gator. But if you hit it just right, you might luck into a concert at the Songrwriters' Island dock (which just happens to be located at the Denslers' Punta Gorda home.) These concerts are intended to replicate a listening room experience, albeit with the wind blowing through your hair and a sunset for a backdrop. Susan, Steve, Gail and I set up our chairs and settled in to enjoy the show.

Girlz Rule is a trio of musicians who only come together a couple of times a year to perform. Kristie and Lynley heard Heather for the first time a few years ago at a music festival in Manassas, Virginia.They were in awe of her voice (which IS pretty darn awesome.) 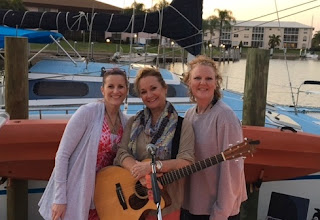 As the three sat together, they talked about the fact that women were underrepresented at the festival. Perhaps the three of them could do something to remedy that situation. Girlz Rule was formed on the spot.

The women typically perform with their respective bands around the country, and I'm sure those concerts are great as well. But a Girlz Rule event is definitely worth seeking out.

Unlike Married to Broadway, I didn't recognize their repertoire other than a few cover songs. Instead, we heard songs with titles like "Tired and Sick," "The Eye" and the aptly named "Hell on Heels."  (I loved the refrain in "The Eye" of "You can dance in a hurricane/But only if you're standing in the eye.") And that was just fine with us. After all, we were there to hear songwriters sing their own music.

Girlz Rule will be performing in our area for the next few days. Click here for a schedule and to hear some of their music.