Traditions are a wonderful thing. And one of my favorites is my annual outing with friends from my time in Nova Scotia. This year's adventure was geared around biking the Pinellas Trail between Dunedin and Tarpon Springs.

Our first stop was the Sunken Gardens in St. Petersburg. In 1903, plumber George Turner purchased four acres in what is now downtown St. Pete.The property had a lake on it that filled an ancient sinkhole. Mr. Turner promptly drained the lake and turned the area--15 feet below street level--into a gorgeous tropical garden.

Over time, Mr. Turner's gardens became so popular that he began charging a five cent admission fee to tour them. (Inflation being what it is, it now costs $10 to enter.)

In 1998, after being nurtured by three generations of Turners, the Sunken Gardens were declared a local historic landmark and purchased by the City of St. Petersburg. 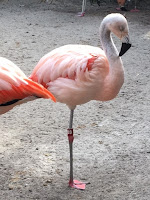 I knew none of this history when proposing the stop. The Gardens just sounded interesting, and I knew my friends are botanical types. As promised, the Gardens are pretty impressive. They are incredibly lush, with water features and all sorts of beautiful palms and bamboo and bougainvillea. We marveled over the amount of maintenance required to keep the almost jungle-like property in such good condition.

I was taken by the flamingos, which do in fact stand--and sleep--on one leg.(Interestingly, scientists don't seem to know exactly why. Some think the posture allows the birds to conserve body heat, since they lose warmth through their legs and feet. Others believe it allows the non-standing leg to rest so the bird can make a quick getaway if it suddenly became prey. Whatever the reason, it's quite charming. ) It was fun to watch them scoop water into their beaks and filter out anything other than tidbits worthy of eating. And it was interesting to see their feathers stand on end when they got into a bit of a squawk. 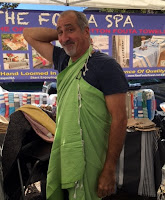 We awoke the next day at our "quirky" AirBNB to perfect biking weather -- cool but sunny.  (Note: Even the Nova Scotians thought it was cool, so it wasn't just my thinned out Florida blood.) We headed out to rent bikes but were quickly sidetracked when we spotted  a farmer's market.

We all fell in love with the Oprah-approved Fouta spa towels. They can be used as beach towels or bath towels or a throw. And, as shown here, they can also be worn as a wrap at the beach. (The photo featuring our Mediterranean model was a condition of my purchase.)  Their versatility reminded me of the old slice-o-matic with its catchy "it slices, it dices, it makes julienne fries" ads. 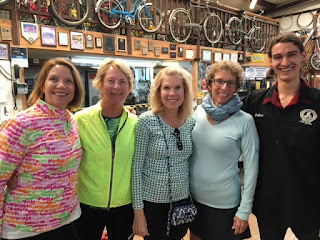 With our new treasures tucked away in my car, it was time to get the main event underway. Jake, our new buddy at Energy Conservatory Bike Shop, set us up with rental bikes for the day. (Our enthusiasm over having a cute young guy help us was a bit embarrassing.)

The Pinellas Trail is a biker's dream. The 47-mile path runs from St. Pete to Tarpon Springs. It's plenty wide for two bikers to ride abreast with an additional lane for walkers and runners.  The Trail is the western-most section of a Coast to Coast trail that runs from St. Pete to Cape Canaveral, a route that warrants future exploration.

For our outing, we had decided on the Dunedin-Tarpon Springs leg of the Trail, which is about a 12 mile ride each way. We meandered along, chatting and anticipating the exciting Sponge Docks (and the promise of an authentic Greek feast) once we arrived at Tarpon Springs.

Suddenly, we saw a crowd of people and heard a lot of ape-like whooping. We had stumbled upon the Suncoast Primate Sanctuary, which has outdoor cages where some of the residents spend their days. Conveniently, a volunteer was outside giving a short explanation about the Sanctuary.

The facility is home to over 100 animals that have no place else to go. In their previous lives, they might have been pets or film stars or zoo animals. The Sanctuary is intended as a haven in which these animals can live out their twilight years. We didn't have time to go inside, so I didn't get a feel for the whole place. But the apes outside put on quite a show for us. One sweet ape would mimic on-lookers when they clapped. Two large apes were swinging and screaming and pounding their chests. (I'm betting they were the retired film stars.) 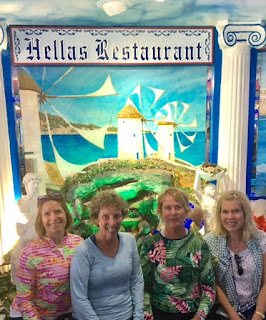 Finally, we reached Tarpon Springs. The Sponge Docks area is a tourist trap extraordinaire. There's shop after shop with sponge-related items. And while we made a brief foray into a shop or two, the food was the main attraction.

You (meaning me) might expect such a tourist spot to have over-priced restaurants with barely edible food. But happily, the Greek community in Tarpon Springs is serious about its food. Our friend Jake had suggested we check out Hellas, where we dined on octopus and grape leaves and pastitsio. I was glad to burn off some of those calories on the bike ride back to Dunedin.

There was more to our adventure -- sunset at Honeymoon Island State Park, a book discussion, a great craft fair, the Charlotte High production of "Tarzan." But the best part of the week-end was just spending time together. We talked about our lives and the world and people we know. As Pam told her husband, "We share our hearts." While this comment immediately made me mimic gagging, I might be the one who appreciated our talks the most. I'm already looking forward to next year's get-together.
at February 17, 2017

Email ThisBlogThis!Share to TwitterShare to FacebookShare to Pinterest
Labels: Biking