An Evening with John McCutcheon 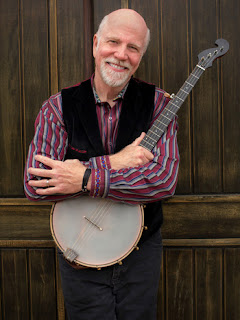 Having spent an hour on the phone interviewing singer-songwriter John McCutcheon, I was looking forward to his concert immensely. He had been charming and funny and full of great stories. I was more excited to see him take the stage, banjo in hand, than I would have been to see any rock star.

But there was no need for concern. After one stanza, McCutcheon picked at his banjo and launched into a story about the song that made its choice perfect.

Growing up in Minnesota, McCutcheon played the banjo. He calls it cultural denial. He told of finding a 78 recording of the 1928 song "I Wish I Was a Mole in the Ground" by Bascom Lamar Lunsford. Title aside, it had what he was looking for -- banjo accompaniment. And so he bought the LP and taught himself the song.

McCutcheon's first gig at a folk festival was at the Mountain Dance & Music Festival in Asheville, North Carolina. The Festival was founded in 1928, and there were some serious singer-songwriters there. McCutcheon was admittedly nervous to perform before an audience of 5,000 folk music fans. But he had learned that none other than Bascom Lamar Lunsford was the founder of the Festival. He knew just the right song with which to make his debut.

McCutcheon hadn't noticed the wizened gray-haired old man standing just offstage. You guessed it -- Lunsford was not only still alive, but at the Festival. Knowing that might have led McCutcheon to pick a different song. And he certainly wouldn't have regaled the audience with the well-known fact of Lunsford's legacy. But all turned out well. And, as many of McCutcheon's stories end, the two became friends during the "too short" remainder of Lunsford's life.

The story alone would have made me eager to hear the rest of the song. But McCutcheon's commentary sealed the deal. With reference to the lyric of "rooting that mountain down," Mr. McCutcheon said he liked the idea of rooting the mountain down from the bottom up.  "We've learned that nothing trickles down," he said. "It all percolates up." 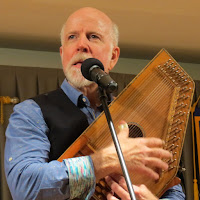 No song was performed without an explanation of its genesis. McCutcheon talked about reading something in the paper one day and telling his wife about it with a bit of outrage.  "It sounds like a John McCutcheon song to me," she said. "And I know just the person to write it."

After obliquely commenting that it was a song we needed to hear right now, McCutcheon launched into "Y'All Means All." It's a song about acceptance and caring from the perspective of a Southern grandmother. She invites everyone to her table for supper even--or perhaps especially--those people she doesn't like so much.

What John omitted in his commentary to the politically conservative Charlotte County audience was the content of the article that had inspired the song. It was about the North Carolina law requiring transgender people to use bathrooms that correspond to the sex on their birth certificates. The White House had revoked the Executive Order on the issue a couple of days before the concert.

One of my other favorite songs from the evening was "Streets of Sarajevo." The song was inspired by the actions of Vedran Smailovic, also known as the Cellist of Sarajevo. In 1992, during the Siege of Sarajevo, a bombing killed 22 people standing on a breadline in front of a bakery.  For 22 consecutive days following the bombing, Smailovic exited a nearby building wearing a tuxedo and carrying his cello and a folding chair. He set up his chair and proceeded to play Tomaso Albinoni's "Adagio in G Minor." Soldiers warned him he was making himself a target of sniper attacks, but he persisted until each victim had been ackowledged in this way.

In the song, McCutcheon sings, "And every day he made me wonder/Where did he ever find/The music midst the madness/The courage to be kind."  (To see an incredibly powerful YouTube video set to McCutcheon singing his song, click here.) And while that alone gives me goosebumps, there's more.

As I said, McCutcheon has a habit of becoming friends with everyone he encounters. The song led to a friendship between McCutcheon and Smailovic. In fact, the two recorded a special version of "Streets of Sarajevo" with Smailovic accompanying McCutcheon on the cello. 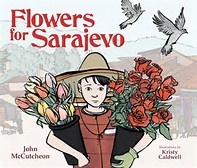 One way to get the recording is to buy a copy of McCutcheon's book "Flowers of Sarajevo." The book translates the events depicted in the song into language understandable by children. It also comes with a CD that includes both the McCutcheon/Smailovic collaboration and a performance by Smailovic of the haunting Adagio. Needless to say, I bought a copy.

I suspect it's obvious that I have become a huge John McCutcheon fan. I guarantee that you will as well if you hear John perform. He travels the country, so there's a chance he'll be coming to a location near you no matter where you're located. It is worth making the effort to get there.

To learn more about McCutcheon and his upcoming appearances, click here.  And to read my story about him in Florida Weekly, click here.