The Olga Hirshhorn Collection at the Baker Museum

Washington, D.C. is filled with wonderful museums. And while I've visited many of them, I've never made it to The Hirshhorn Museum and Sculpture Garden.

It turns out a trip to D.C. isn't required to enjoy works of art from the Hirshhorns' collection. Joe and Olga Hirshhorn moved to Naples in 1969, where Olga became involved with the Naples Art Association and what is now Artis-Naples and the Baker Museum. When she died, she left 400 works of art from her eclectic collection to the Baker Museum.  The wonderful Olga Hirshhorn Collection is on display at the Museum through July 23.

Olga wasn't born with a silver spoon in her mouth. Her parents were Ukrainian immigrants who landed in Connecticut. In 1938, the 18 year old Olga married John Cunningham, her high school English teacher. The couple had three children. Olga ran her own employment agency to help support her family. Her career choice opened the doors to her later life.


I had to chuckle at the tactful way the Baker Museum describes Olga's divorce from Cunningham and marriage to Joe Hirshhorn.  "After a number of years, her life changed. In 1961, Joe Hirshhorn, a Latvian entrepreneur and art collector, called her agency looking to hire a chauffeur. After many phone conversations, Joe invited her to visit his newly purchased mansion in Greenwich, Connecticut. They became friends and later married." 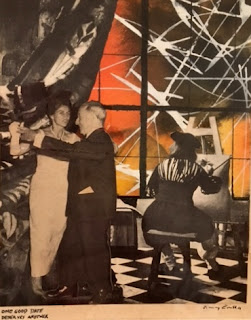 In an interview about her life with Joe, Olga said, “I had to choose whether to learn about art or finance or mining, and  chose art.”  I suspect it wasn't a hard decision.

Olga developed a passion for modern art and began to collect on her own. The Hirshhorns became friends with many artists, including Picasso, Man Ray, Larry Rivers and Georgia O'Keefe. The exhibit includes several works with inscriptions by the artists to the Hirshhorns. If that weren't cool enough, there are works that feature the Hirshhorns, like this collage by Jimmy Ernst entitled "One Good Date Deserves Another."

In addition to two-dimensional works, the Hirshhorns collected sculptures of all varieties. Following Joe's death, Olga purchased a carriage house in Washington, D.C. where she spent a portion of her time.  She dubbed the 500 square foot residence the "Mouse House" and filled it with intimate works from her collection. The exhibit includes a number of sculptures from the Mouse House, and they are true gems.

Olga embraced the idea that art is personal and doesn't have to be to one's liking to be worthy of consideration.  "...I feel art is something that does create an emotion, whether it's an emotion having to do with offensiveness, puzzlement or love, interest, any of those things. With it, you've created something. I think that's important.  I've looked at a piece of art, and I've been repulsed by it, I have learned that the artists are constantly searching and creating. They stimulate you...You are forced to look, think and wonder what the artist is trying to do."


While I doubt there are works in the exhibit that anyone would find offensive, the modern collection might not be everyone's cup of tea. I loved it, though, and look forward to more visits while it is on display. I'm also hoping to take in the talk by Stephane Aquin, chief curator of the Hirshhorn Museum and Sculpture Garden, on March 29. Perhaps I'll see you there.