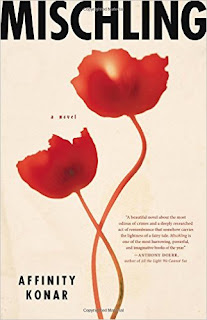 I will tell you upfront: "Mischling" by Affinity Konar is not an easy read. In alternating voices, the novel follows the journey of Pearl and Stasha, 12-year-old twins sent to Auschwitz. Once there, they become subjects in Mengele's experiments involving doubles and other children he considered special.

When we first meet Pearl and Stasha, they are arriving at the camp with their mother and grandfather. Music greets the boxcars as the doors swing open. (We learn more about this later.) They are taken from their family and soon have numbers inked on their arms. Stasha says of them, "I hated [Pearl's] numbers even more than mine, because they pointed out that we were separate people, and when you were separate people, you might be parted."

The girls quickly learn the value of planning and resourcefulness.They allocate "necessities" between them. "Stasha would take the funny, the future, the bad. I [Pearl] would take the sad, the past, the good."

They make friends with the feisty Bruna. She's of interest to Mengele because she's an albino. She tells them that twins are more highly regarded. "...You are still objects to him, mere things. But precious objects. You are the grand pianos of this place, the mink coats, the caviar...The rest of us--just kazoos, canvas, tinned beans."

They make other friends as well. Stasha becomes close with Patient Number Blue, a boy who's lost his other half. Pearl becomes enamored of Peter. When she tells him she loves him, his response is sadly understanding of their reality. "You don't. You could--I think--in time. But you're just saying that to me because you think you won't have a chance to say it truthfully someday, aren't you?"

They become the subject of experiments. Eight hours a day, three days a week. The pain experienced by one girl is felt equally by the other.

As the story continues, unspeakable acts occur. But there's a resilience in the children's spirit that makes you keep reading. 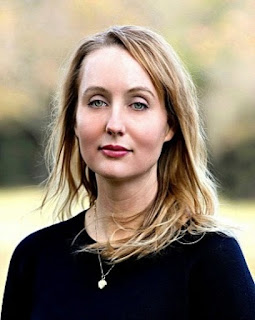 That's all I'm going to tell you about this beautifully written, heartbreakingly difficult story.  I will, however, tell you a bit about what inspired author Affinity Konar to write "Mischling."

Konar comes from a family of Polish Jews. When she was 16, she read "Children of the Flames: Dr. Josef Mengele and the Untold Story of the Twins of Auschwitz" by Lucette Matalon Lagnado. She learned that of the 3,000 twins who found themselves in Mengele's "Zoo," only 160 survived. The idea to write what became "Mischling" began with that reading.

As to the device of alternating between Pearl's and Stasha's voices, Konar said in an interview with The Canadian Jewish News, "I thought it was important to get two different perspectives, because I wanted one to, sort of, encapsulate a precise, clear, distant voice about the history that was taking place, and that was Pearl. Stasha sort of embodies a raw emotive perspective. Whenever I personally read a Holocaust narrative, I feel like I have those two voices, and I feel like everybody does, warring in their mind. You have a gut reaction, and then you’re trying to process the events. That’s why I decided to split it that way."

"Mischling" is not a book to read in one sitting. I couldn't muster the emotional wherewithal to read much more than a chapter at a time. But it's a part of history worth knowing -- and yet another reminder why the horrors of the Holocaust can never be forgotten.