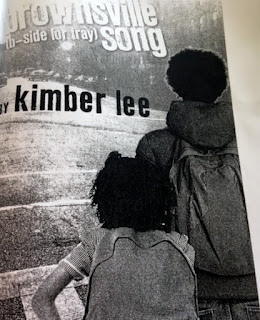 "Stage is a method of dialogue. It is a conversation the actors have with the audience each night." So said Kate Alexander, director of Florida Studio Theatre's upcoming production of "brownsville song (b-side for tray)."  The play, which was written by Kimber Lee, premiered at the prestigious Humana Festival for New American Plays in 2014.

FST believes the issues raised by "brownsville song" must be discussed in today's world. The show tells the story of an African-American boy about to head out into the world.  Tray lives with his grandmother and nine-year old sister in Brownsville, a rough area of Brooklyn. He is a good kid who's trying to get into college. But we learn in the opening scene that Tray was killed when he was in the wrong place at the wrong time.

Tray's grandmother Lena opens the play with a heartbreaking monologue that Ms. Alexander compared to the foreshadowing sometimes seen in Shakespeare's plays. This excerpt will give you a sense of the emotion that hits the audience from the start.  The words in parentheses are stage directions.

"Do not begin with me
Do not start your telling with me
Trust me
It ain't the way you want this story to begin...
I got words crowdin up from my belly
through my neck
shoving my mouth into the same shape
forming the same out loud thought over and over
HE WAS NOT
HE WAS NOT
HE WAS NOT...
He ain't been in a gang
He ain't run with no crew
He ain't beef with anybody
He was not
And what he is
(Pause)
(A jagged breath.)
What he was
(The rage begins to breach her control -- she struggles, gets it in check....)
He was going to college this fall
He was a Golden Gloves Champion...
He was goin to the dentist next week and get his first filling
Eighteen years old and never hadda cavity...
He was a terrible liar and semi-reliable bout everything but his baby sister and boxing...
He was not the same old story...."

While there are moments of lightness in the show, it is not an easy show to watch. "It will definitely be hard on the audience," Ms, Alexander said, "Which is fantastic."

FST doesn't expect "brownsville song" to be a mega-hit like this season's "Million Dollar Quartet" has been. But that's okay. The hope is that the show will make people think about the cost to society of gun violence and, perhaps, gain some compassion for those affected.

Ms. Lee was driven to write this play after reading a blog post about the death of a real high school-aged boy in Brownsville.  In an interview with Seattle Repertory Theater, she said, "..It lodged in my gut and wouldn’t let go. I kept thinking about this boy’s family and loved ones. I kept thinking about the tremendous loss of life in some of our communities, and how easy it is in this soundbite world for these losses to disappear from our consciousness, and how that is especially true for a neighborhood like Brownsville, which only makes the news when something bad happens. Then everyone forgets about it until the next incident, and nobody bothers to look more deeply into the fact that Brownsville has been an under-served, ignored section of New York City since its inception. Often there can be this sort of head-shaking resignation–“Oh well, that’s just what happens there”–or an assumption that if you look a certain way and live in a certain zip code, your life is worth less, you matter less, and this sort of wall silence descends around the loss..." (To read the interview in its entirety, click here.)

To facilitate a conversation about the issues raised by the show, there will be post-play discussions following each Thursday night performance of "brownsville song." In addition, FST is hosting two special panel discussions that will focus on the issues raised by the play.  On March 6, Dr. Eddy Regnier will lead a discussion about the Social Status of the Young Black Male.  And on March 13, Michele Redwine will lead a forum on the topic of Mothers and Daughters for Black Lives. Each event will take place at 5 p.m. in Bowne Theatre.

"brownsville song (b side for tray)" opens on Jan. 25 and will play through March 26.