It's been ages since I've been out in a kayak.  Two recent outings reminded me of how much fun it can be on the water.

First up was Paddle Punta Gorda. Susan was my partner in crime for the experience, which was perhaps geared towards more regular paddlers than we are. (It was Susan's second outing ever, and I am definitely a novice.)

Our day started with an overview of what we could expect from our paddle on Alligator Creek. The leader got our attention when she started talking about the black crabs and spiders that might drop onto our kayaks when we were gliding through the mangrove tunnels.

"I didn't read that in the waiver," Susan noted. "It was in spider print," someone responded.  With that, we were off.

It was a lovely paddle during which our naturalist guide shared some tidbits about the flora and fauna. We learned that ospreys mate for life. The female birds have white markings around their necks that make them look as if they've been to a jewelry store. They are efficient fishing birds. Using their talons, they snatch their prey from the water, turning the fish head to the wind in order to be more aerodynamic.

Brown pelicans, on the other hand, turn their heads sideways when they scoop fish from the water.  Even doing this, they take in approximately 2 1/2 gallons of water. The good news is that each bird lives 25-30 years, so they have plenty of time to perfect their technique.

The biggest issue with the paddle wasn't the spiders (which we later learned had been cleared in advance), but with Susan's kayak.

Not long after our departure, I heard Susan say (from a distance), "My kayak won't go!"  I thought she was just being funny. Instead, she was having a problem. The pedals inside her kayak had slipped down so that she could only reach them with her tippy toes. With no leverage, she had to paddle about four times as hard as anyone else to keep up. Eventually, a more experienced kayaker helped her adjust the pedals, at which point her day got a lot better.

Next up was a paddle around Matlacha Pass during Wendi's visit. I had no idea what to expect from this outing with Nature Tours and More that I had purchased on Groupon. It turned out to be a private guided tour for the two of us, which was particularly nice given the conditions.

When we arrived at Matlacha Community Park, it was so windy that there were whitecaps on the water. This did not bode well. Lynette, our guide, quickly reassured us that we would be protected if we headed the other way. We gave her our trust and set off on our adventure on the Great Caloosa Blueway.

Once on the water, we noticed a rope streaming behind Lynette's kayak. "Is that a tow rope?" I jokingly asked. "It is," she replied.  We hoped we wouldn't need it, but it was good to know it was there just in case.

As we paddled along, Lynette talked to us about the importance of the mangroves to our eco-system. Virtually all of the keys we were kayaking past started with a single mangrove taking root. Surprisingly, mangroves don't actually like salt water all that much. Their yellow leaves are "sacrificial;" they take in the salinity and die for the betterment of the rest of the plant.  The oysters that attach themselves to the mangroves also play an important role, as each oyster can filter up to 50 gallons of salt water each day. 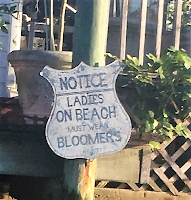 When it came time to head back, Lynette asked us if we wanted to backtrack or paddle across the open water. Our destination was near a bridge that looked like a tinker toy creation on the horizon. When we turned the corner, it was so choppy that I literally couldn't make any headway. We wisely decided that we had enjoyed our paddle out and would be happy to revisit the scenery.

Still, it wasn't easy. The wind had picked up, so Lynette suggested hugging the mangroves and, later, the docks to make the paddling easier.  Not wanting to make it any harder on myself than necessary, I followed Lynette's advice. Wendi, on the other hand, "let the kayak take her the way it wanted to go" and ended up paddling across open water much more than I did. We both slept well that night.

I'm hoping to persuade Susan to go on another kayak outing -- perhaps a private tour to Lovers Key with Lynette as our guide. I somehow suspect that the dusk tour to see the bats would be harder to sell.