Author Nathan Hill likens the ten years he spent writing "The Nix" to tending a garden. It was a labor of love, something he says he did for himself rather than as "a widget to get popular."

But the endeavor has made him wildly popular as well. "The Nix" has a well-deserved spot on best of 2016 reading lists compiled by organizations from The New York Times to Library Journal to Amazon. It was the Audible book of the year. (Narrator Ari Fliakos is ridiculously wonderful.) It's been translated into 25 languages. And it's being adapted for television, with Meryl Streep in the role of the elder Faye.

Hill spent an evening at the Alliance for the Arts in Fort Myers, reading from and talking about "The Nix." I was front and center to hear more about the book, which made me laugh out loud and risk near-death experiences as I jotted down passages too wonderful to forget that I heard while driving. (Note: The near-death experience part is a slight exaggeration.) 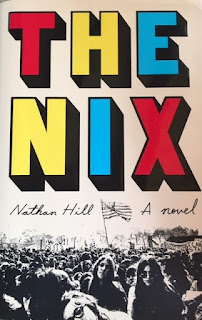 It's difficult to distill the story of "The Nix" into a sound bite. (It is, after all, 6oo+ pages long.) Hill's website describes the book in part this way:

"A Nix can take many forms. In Norwegian folklore, it is a spirit who sometimes appears as a white horse that steals children away. In Nathan Hill’s remarkable first novel, a Nix is anything you love that one day disappears, taking with it a piece of your heart.

It’s 2011, and Samuel Andresen-Anderson—college professor, stalled writer—has a Nix of his own: his mother, Faye. He hasn’t seen her in decades, not since she abandoned the family when he was a boy. Now she’s reappeared, having committed an absurd crime that electrifies the nightly news, beguiles the internet, and inflames a politically divided country. The media paints Faye as a radical hippie with a sordid past, but as far as Samuel knows, his mother was an ordinary girl, who married her high-school sweetheart. Which version of his mother is true?......"

But before Hill gets deep into Samuel and Faye's relationship, he fills us in on Samuel's current circumstances. In an excruciatingly hilarious chapter, we meet Samuel's English lit student Laura Pottsdam. Samuel and Laura are meeting to discuss the paper she plagiarized on the topic of logical fallacies in Hamlet's thinking. The college has a software program that compares essays written by students to its vast database of papers. Laura's paper was found to be 99% plagiarized -- in fact, "everything had been stolen except for the name 'Laura Pottsdam."

By request, Hill read this chapter at the Arts Alliance -- and I was nearly doubled over once again with laughter. Hill structured the conversation between Samuel and Laura as a series of 16 logical fallacies -- from circular arguments to false compromises to appeals to emotions. (Hill said he edited out another eight fallacies.)

The chapter starts with "the loaded question."  "I wonder what is wrong with the software?" says Laura..."I wonder why it's malfunctioning. Is it wrong a lot?"

"You're saying it's a mistake?"

"It's like so weird. I don't get it. Why would it say that?" (One of the things I loved about Hill's writing was his ability to capture the voices of his characters.)

Hill goes on to describe his student's appearance. "Laura looks like she showered in a wind tunnel, her hair is so frazzled and disorganized. That she is wearing tiny frayed flannel shorts roughly the size of a coffee filter is impossible to ignore...On her feet, she's wearing slippers, Muppet-fuzzy...with a gray-brown film of dirt around the footpads from being worn too often outdoors. It strikes Samuel that she might have come to his office today literally wearing her pajamas."  (Note: Wearing PJs out is something my niece described doing at Emerson.)

Then there's the appeal to pity.  "This is so unfair," she said...."You asked for an essay on Hamlet. That's what I gave you."

"I asked you to write an essay on Hamlet."

"How was I supposed to know that? It's not my fault you have these weird rules."

And on it goes.

It turns out that Hill was himself a professor and that the conversation was based in part on his own experiences. He shared that one anonymous student gave him a low rating on "RateMyProfessors.com. The student's comment was, "I asked him for help and he refused. He's a jackass."

As you can probably tell, I was wholly enamored with "The Nix." My next post will share more of Hill's fabulous writing and his thoughts about the book.