Theater has the power to compel audiences to confront social issues. "Best of Enemies" at Florida Repertory Theatre made me consider not only where race relations in our country have been, but where they are going. The show was the yin to the yang of "Guys and Dolls" at Asolo Rep.

The play tells the true story of an attempt made in 1971 to desegregate the Durham, North Carolina public school system. Yes, the Supreme Court's ruling in Brown v. Board of Education in 1954 stated that "in the field of public education 'separate but equal' has no place." But nearly 20 years later, Durham had only succeeded in fully integrating its county-run elementary schools. Higher level county schools -- and city schools at all levels -- remained essentially segregated.

Enter Bill Riddick, the Department of Education's man on the ground. Riddick put together a steering committee of local leaders to spearhead an intense planning period (known as a charrette) open to the entire community. At the conclusion of the ten day charrette, the committee would present its desegregation proposals to the school board for consideration. It would have been a daunting task even if there were unanimous support for the objective of an integrated school system.

Riddick realized the necessity of including representatives of both sides of the desegregation issue. He enlisted Ann Atwater to speak on behalf of people of color in the community. Atwater was a divorced mother of two daughters who struggled to make ends meet. In her "spare" time, she fought for better housing for the poor in her community. She is full of spit and vinegar.

Riddick also persuaded C.P. Ellis, the Exalted Grand Cyclops of the Ku Klux Klan, to participate. No explanation is required about his views. Ellis was truly hateful, and it made me squirm to hear the language he used to talk about African-Americans. On the "human" side, Ellis was the father of four children, including a son who was deaf and mute. Like Atwater's household, his family was barely making it. His status in the KKK gave him an identity and a sense of belonging. 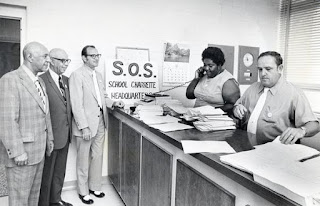 As the charrette progressed, it seemed unlikely that the members of the steering committee would succeed in overcoming their differences. At one point, Atwater proposed bringing her church choir into a meeting to sing. She felt it would lift the spirits of the people working hard to help their community. Ellis didn't like the idea. But he agreed to concede the point if an exhibit about the proud history of the KKK could be put on display. Surprisingly, Atwater agreed. She knew that in order to fight your enemy, you have to understand where they're coming from. And so we see--in juxtaposition--Ellis swaying and clapping his hands to the music of the choir and Atwater learning about the roots of the KKK.

As the days passed, Atwater and Ellis began to work together. Ellis' standing in the community rapidly fell as he veered away from the hard line of the KKK.  Both Ellis' and Atwater's children were ostracized at school as the offspring of traitors. Ultimately, they realize their commonality as poor, disenfranchised citizens.

The two became friends of a sort -- the "best of enemies." But that doesn't mean the community at large had suddenly become enlightened. The committee's recommendations were rejected in full by the school board. The audience is left to contemplate whether Atwater and Ellis' friendship provides a basis for hope. 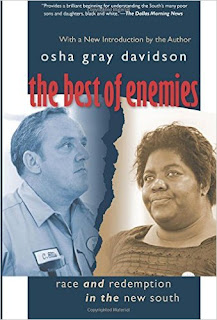 My biggest issue with the play was the speed with which Ellis' conversion occurs. To go from leading the KKK to seeing eye-to-eye (on some issues at least) with an outspoken African-American woman seemed preposterous.  But truth can be stranger than fiction.  Some post-play Googling revealed that the timeline for Ellis' conversion is historically accurate.  (For an interview that Studs Terkel did with Ellis, click here.)

Florida Rep's production of "Best of Enemies" was top-notch. Both Graham Smith as Ellis and Mary Hodges as Atwater were excellent, and I look forward to seeing more of them. The multi-media staging was terrific as well. The screens on either end of the black box theater had the effect of enclosing the audience in the action. It was uncomfortable at times, but in an intentional way.

If you're interested in learning more about the unlikely friendship between Atwater and Ellis, the play is based on a book of the same title by Osha Gray Davidson.

Postscript:  The Durham, North Carolina public school system did not fully desegregate until 1992.