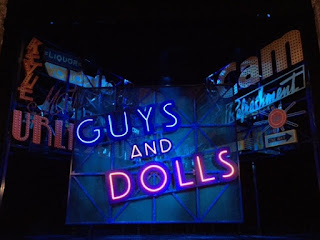 'Tis the season. And I'm not referring to the holidays, although of course they are upon us. The Southwest Florida theater season is in full swing, and I'm putting the mileage on my car to prove it.

As Janice and I were leaving Asolo Rep's delicious production of "Guys and Dolls," she pointed out that the show was a great contrast to the serious--and unfortunately timely--production of Florida Rep's "Best of Enemies" we'd seen the prior week. Her comment has lingered with me. (It also prompted me to watch a YouTube video of the wonderful SNL Point/Counterpoint with Jane Curtin and Dan Akroyd. Jane is not, in fact, an ignorant slut.)

First, the fun. Like last year, Asolo Rep is kicking off its season with a crowd-pleasing musical. I sometimes take myself entirely too seriously. While I was looking forward to seeing "Guys and Dolls," I had found myself doing some advance eye-rolling about the light-hearted show. Isn't theater supposed to make me contemplate the world and my place in it, etc., etc.?

The answer, of course, is a resounding "sometimes." With each familiar song, I found myself enjoying "Guys and Dolls" more. Frank Loeser's lyrics are as fresh and fun as the day the show premiered on Broadway in 1950. "Luck Be a Lady" rang out from the gambling den carved out of a New York City subway platform. Adelaide and her fellow "dancers" sang "Bushel and a Peck" from the stage at the Hot Box Nightclub. And Sarah got a break from proselytizing and sang "If I were a Bell" while in Cuba with Sky Masterson.

Great lyrics can be wasted, though, if the singers aren't up to the task. But Asolo Rep's production features a cast filled with Broadway-caliber voices. The resumes of the four leads (Cole Burden/Sky; Audrey Cardwell/Sarah; and Chris Hoch/Nathan Detroit; Julie Kavanagh/Adelaide) are filled with National Tour credits and a spattering of Broadway shows. Cardwell's voice had an operatic quality made for the stage. Burden and Hoch were terrific as well.

But it was Kavanagh who stole the show with her portrayal of Adelaide. We of course don't know what Kavanagh's real voice sounds like, as Adelaide has a baby doll feel about her and a voice to match. My favorite Adelaide number was not "Take Back Your Mink" (although I watched the striptease carefully after getting the inside scoop from costume designer Brian Hemesath).  Instead, it was "Adelaide's Lament," a number in which she sings about the physical toll a 14 year engagement can take on a person. (Sample lyrics include "In other words, just from worrying if the wedding is on or off , A person can develop a cough." You'd recognize the song the moment she starts singing.)

Kavanagh's non-musical moments were equally captivating. Her expressions were priceless. Her mincing steps as she walked around in her form-fitting dresses provided the perfect contrast to Cardwell's marching around the stage in her maroon "save your souls" outfit. (Poor Cardwell to have to wear this homely dress in the midst of the glamour.) 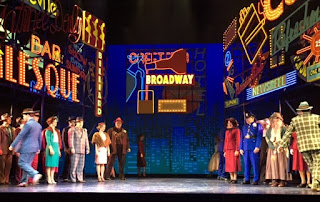 I would be remiss not to mention Lee Savage's fabulous sets and Paul Miller's lighting for the show. The duo recreated the feel of Times Square circa 1950s (well before it had been Disney-ized). It's worth noting that Miller has done the lighting for many New Year's Eve celebrations in Times Square. (Click here to see some photos of his work.)

And if you (meaning me) want a more serious take-away from the show, here's an interesting tidbit. "Guys and Dolls" won the Tony Award for Best Musical in 1951. It was also up for the Pulitzer Prize for drama. The book for the show (which was based on two stories by Damon Runyon) was written by Jo Swerling and Abe Burrows. Unfortunately, Burrows had gotten caught up with the House Un-American Activities Committee due to his association with some Communist Party members. This resulted in the Pulitzer nomination being vetoed.

"Guys and Dolls" plays at Asolo Rep through January 1st. It's well worth the effort required to fit it into your holiday schedule.