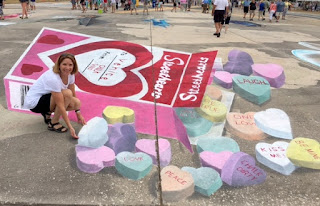 The Chalk Festival is always a highlight of the season. This year artists from more than 40 countries descended upon Venice to create amazing traditional and anamorphic (3D) pavement art.  And it all will go away with the first hard rain.

It's the third year the Chalk Festival has been held in Venice (rather than Sarasota), and the first in which all of the art has been at the airport location. In years past, most of the traditional pavement art was downtown while the 3D works were on the runways.  Being in one spot made for a less disjointed--if a bit more crowded--experience. 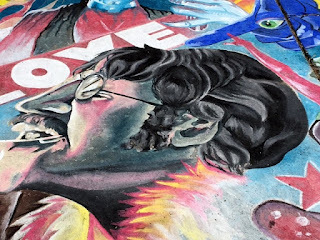 Dorrit and I followed the recommendation to start with the 2D art, which seemed to go on for miles. People clearly had a lot of fun with this year's Love and Peace theme.

There were multiple works featuring the Beatles (individually and together). John Lennon and Yoko Ono's Bed-in for Peace was represented. Janis Joplin and Stevie Wonder and Bob Marley and the Dalai Lama also made appearances. And there was plenty of other art harkening back to the psychedelic '60s -- a VW beetle and a bespectacled Woodstock love child were among my favorites. 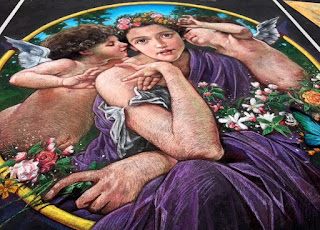 But not all the art was '60s-inspired. There were also madonnas with children and cartoon characters and animals. I loved the updated "Girl with a Pearl Earring," which melded a classic work of art with the Love and Peace theme.  Instead of a pearl, her earring bore a peace sign.

While the work of these traditional pavement artists was phenomenal, Dorrit and I agreed that we like the 3D works we could be a part of the most. And there were plenty of those to enjoy. 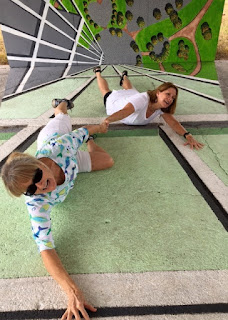 The first interactive painting we came to was actually a 4D work that required the viewer's participation to make sense. It really turned my perspective on its head. In order to get this shot, we had to lay on the ground, which was painted to look like a tall building. The park into which we were about to plummet was painted on a plywood wall from which the "building" extended.

A volunteer stood by to take pictures, giving each group two minutes. I loved watching people get into it with arms and legs akimbo. One woman in a wheelchair didn't let her limitations stop her from getting in on the fun. Her companion held onto the wheels of her chair with one hand and her sunglasses in the other to simulate the sense of falling.

I'm not sure what this work had to do with Love and Peace -- perhaps it represented the terrifying feeling you get when you're falling in love???? -- but it was lots of fun.  (Note to self--and Dorrit:  Don't wear white to the Chalk Festival.) 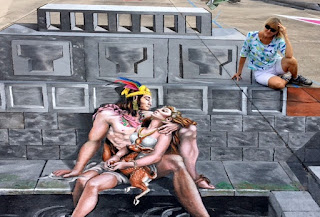 Since this was our third year going to the Festival, we are old hands at how to get the most out of the 3D art. Many of the works have footprints painted nearby to show you the best viewing location. A few (but not nearly enough) had chairs or stools to stand on to get more of a bird's eye view. Although you might have to wait a few minutes for your turn, it's well worth it.

And what nobody tells the newbie is that the works look more three dimensional through the lens of a camera than with your naked eye.  It's always fun to hear someone exclaim when they see the three dimensionality for the first time.  Often they're halfway through the works, which makes me hope that they--and their companions--have the patience to start over. 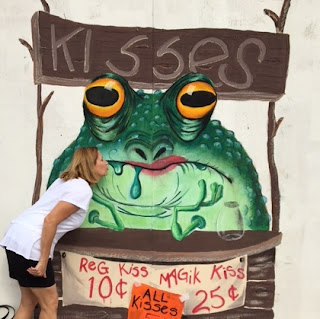 The one thing I did miss this year was interaction with the artists. Instead of going over the week-end, we went on the official viewing day. The benefit was that all of the art had been completed. The downsides were that we didn't get to see the works taking shape and that most of the artists had departed that morning.

In an ideal world, multiple visits are the way to go. But with time at a premium, I just couldn't get there more than once. The good news is there's always next year. Mark your calendar for  November 10-13, 2017. I'm already looking forward to it.