A Peek at the Costumes in Asolo Rep's "Guys and Dolls"

"Clothes make the man," the saying goes. In the theater, this might be doubly true. A character's costume speaks to the audience before the actor has said a word.

Asolo Rep is kicking off its season with a revival of "Guys and Dolls." I recently attended a brunch with costume designer Brian Hemesath, who shared some of the costumes and tricks of the trade. It was a blast.

Brian ended up working on this production in a slightly unusual way. Each year, Broadway Cares hosts an event called "Broadway Bares."  (I'm sure you get the picture!)  "Guys and Dolls" director Josh Rhodes and scenic designer Lee Savage were in New York for the event. Brian designed the costumes for one of the numbers. He compared the designs to those used in "The Full Monty," which trick the audience into thinking it sees more than it actually does. Josh and Lee quickly realized that Brian's skills would be perfect for their production (which--spoiler alert--includes some burlesque numbers). 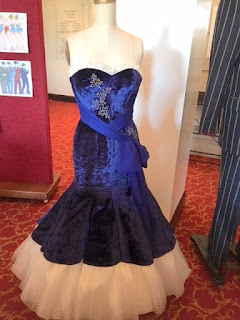 One of the costumes we had the chance to see was the dress from Adelaide's "Take Back Your Mink" number. (It's one of nine costumes she wears during the show.) The dress includes 150 yards of netting that gives it the shape at the bottom.  The sash across her waist has a hook that Adelaide releases to drop the dress to the ground. (A snap would run the risk of coming open while she's dancing.) Because the stage in the strip joint in which she wears this dress is so small, the choreography for this number was created using the actual dress.

Adelaide then appears wearing a bustier. As an aside, the numbers 35/24/33-1/2 were written on the mannequin. When I asked Josh if those were the actress' measurements, he obviously recognized the dismay in my voice. "She's in her 20s," he said reassuringly. "And it's her job to be little."

The bustier is held together with a knitting needle that can be pulled out easily for the a "jaw dropping" reveal.

"She goes from very classy to very naked very fast," Josh said with a laugh. The cast and crew gasped during rehearsals when they saw the number the first time. 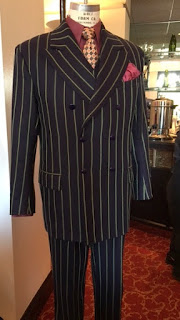 Brian credits his background working in a costume house with an Italian tailor for the 16 men's suits he designed for the show.  "I enjoy the architecture of a suit," he said.

His ability to create his own patterns comes in handy when designing danceable suits. The underarms include gussets to allow actors to raise their arms without the jacket hiking up as well.  The pants are cut high to allow dancers to kick and lunge without tearing out the crotch.

Brian took full advantage of Asolo Rep's in-house costume shop when designing his costumes. Almost every costume you see on Asolo Rep's stage is made by hand. In the case of this suit, the work included creating the pinstripes using an almost lime green embroidery thread. This embellishment ensures the stripes will be seen from the back of the balcony. This process alone took three-four days.

We learned that mock-ups of costumes are first made from inexpensive material--typically muslin--and fitted to the actor before the fashion fabric is cut. The difficulty of outfitting understudies was acknowledged. The female understudies are more or less the same size, so a quick nip and tuck would make the costumes work. The male understudies would wear their own suits rather than copies of the suit designed for the principal actor. 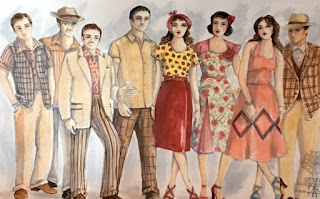 The challenge of cleaning the costumes was discussed as well. Whenever possible, slips are worn underneath the dresses. The slips can be cleaned after each show, with the costumes sent out once a week. The same goes for men's shirts and suits.

Then Brian shared a tip that caught the group's attention. Apparently, a solution made of vodka and water is "the original Fabreze."  It also has the benefit of serving as a disinfectant.  Since the ratio is about half vodka to half water, Brian recommended using an off-brand vodka rather than, say, Grey Goose.

As always, getting this glimpse behind the scenes of the show will make me appreciate it all the more. I can't wait.