There are a lot of amazing people in the world. People who don't just sit around and lament the state of the world but go out and change it. At the recent TEDxSarasota event, ten people shared their stories and visions of a better world.  The day kicked off with a talk by singer-songwriter turned activist Sarah Symons.

Sarah is the founder of Made by Survivors, a non-profit that trains former victims of human trafficking crimes to make jewelry as a means of supporting themselves.They also house and educate survivors. Sarah began with a couple of stories horrifying beyond belief. Imagine a family so poor that they sell their daughter into sexual slavery. Then imagine the terror and pain that young girl experienced when she is raped by more than ten men on her first night away from home. But the next part is almost the most unimaginable of all. Once that young girl finds her way to Made by Survivors, she leaves that past behind and becomes a young woman who can laugh and have friends and support herself through newly-learned skills as a jewelry maker. 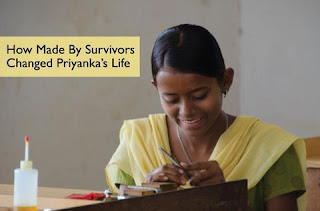 After setting the stage for her talk with this background, Sarah told us that 95% of the young women helped my Made by Survivors have recovered from their trauma. How, you might ask, is this possible? Sarah believes there are three behaviors that enable this to happen.

First, once the girls have talked about their trauma and received counseling, they focus on what they want in the future. Sarah said they "live into that belief" rather than letting the past define them.

Second, the girls work to stay in the present. You can't heal the past by living in the past. (The education and training the girls receive and the subsequent work they do enables the girls to keep their minds busy on something other than revisiting the past.) 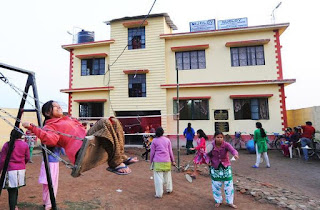 Third, the girls live in gratitude. They've already endured hell and are grateful for having a safe place to live and a way to make a living that they can be proud of. "Their modest expectations of life have become their superpower," Sarah said.

Sarah humbly said that Made by Survivors isn't saving these girls, but offering them the tools to realize their potential. She posited that the mindset she described could help virtually everyone lead happier and more productive lives.

To learn more about Made by Survivors and how you can help (including by buying their products), click here.

Throughout the day, videos of TED talks were shown to provide further inspiration.  Memory Banda's personal story about fighting child marriage laws and traditions in Malawi has a clear connection to Sarah's talk. Click here to watch that video.

The day was off to an inspiring start. Stay tuned for more of my take-aways.

Email ThisBlogThis!Share to TwitterShare to FacebookShare to Pinterest
Labels: Lectures