Art is personal.  So it's no surprise that artists use their work to comment on the world around them. Needless to say, this election cycle has provided a wealth of issues for artists to explore. Both the Alliance for the Arts in Fort Myers and Art Center Sarasota have politically-themed exhibits on display that reveal what some of our local artists are thinking.

The Alliance for the Arts has a walk and talk for each new exhibit which is often led by the judge for the show. Editorial cartoonist Doug McGregor was the juror for the "Politikos" exhibit on display through Nov. 5. And while McGregor shared what drew him to some pieces, he took advantage of having many of the artists on hand to explain their intent.


Visitors to the gallery are greeted by "Beyond the Division Wall" by Cesar Aquillera. It would be easy to glance at the work, take it in as a message that America should be a nation that embraces people of all ethnicities, and keep moving. I have to admit that that's what I did. Shame on me.

Aquillera explained that the 11 slats in his work represent the 11 Confederate states.The flag-like fence isn't of the white picket variety. It's divided into red and white to show the way that walls separate people in "our neighborhoods, hearts and heads." The missing blue represents a lack of freedom. And what looks at first glance as stars--or perhaps missiles--are in fact little Ku Klux Klansmen.
﻿

Fiber artist Roseline Young continued the theme of divisiveness in her "Building a Democratic Bridge not a Wall of Lies and Pink Promises." (She said the initial title was longer.) This detail from her quilt shows a tiny overwhelmed Young on a bridge looking out onto a sea of multi-colored panels. The panels do not represent the Rainbow Coalition but the dissonant voices heard during the campaigns. Rose echoed the sentiment of everyone in the room when she said she's more than ready for this election to be over.


Art Center Sarasota has two politically themed exhibits on now.  The first is Patricia Anderson Turner's "Viewpoints: All Sewn Up." I have long been a fan of Patricia's issue-oriented  fiber art.  Her "Assault on Orlando" includes images of the assault weapon and bullets used in the attack and pictures of each of the 49 victims. Bird-like creations hover above the work, which is installed on the floor of the gallery. Patricia told me the birds represent "the memories of their happier lives soaring in and out of her awareness" and that they are a way to remember the victims in a more positive manner. The wall card for the work reminds viewers that since the ban on assault weapons expired in 2004, there have been 14 mass shootings with assault weapons, including the killing of 20 elementary school children in Sandy Hook, New Jersey.


I of course loved Anderson's "Humpty Trumpty."  Accompanying this piece was a work reminiscent of the samplers of yore that read "Humpty Trumpty wanted a Wall and he wanted our neighbors to pay for it all. He thinks we're dumb asses 'cause we pay our taxes. His opinion of women is Neanderthal. Will November bring his curtain call?" Turner provided a balanced view with other panels featuring parodies of Obama and Hillary and Bill, respectively. The related wall card notes that rhymes such as these that could be shared verbally were prevalent in repressive regimes in which dissent and criticism were cause for punishment.

The main gallery features an exhibit entitled "Swing State" that runs through Nov. 25. If you have any question about which way Sarasota artists are leaning in this election, look no further. 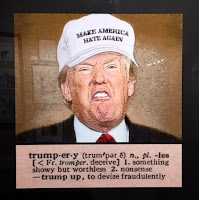 While there were a few unflattering portrayals of Hillary, there were lots of anti-Trump works to enjoy.  My favorite was Mike Hodges' "Trumpery." And while the definition of "trumpery" could hardly be more apt, what I like about the work is the way Trump's motto has been turned on its head. I'm not telling you anything new when I say that his campaign has revealed the dark side of America. The fact that there are so many people who are on board with his bigotry and misogyny and hatred and fear (and likely share these world views) alarms and saddens me. It's an America I don't recognize.

Thanks to these local art centers for providing artists the chance to show the role of art in the political process.
at October 20, 2016