Each year, the National Book Foundation selects books "celebrating the best of American literature" for consideration for its annual awards. Since the awards were instituted in 1950,the categories of prizes have varied, at times including Science, First Novel and Arts and Letters. Today the categories are just four:  Fiction, Non-Fiction, Poetry and Young People's Literature. Eligibility is limited to books written by an American citizen and published by an American publisher, with submissions coming from the publishers. A panel of five judges for each category reads the submissions and a long list of books is released in September. The short list of five books will be released tomorrow, with the winners announced in mid-November. To read more about the National Book Awards and to see a complete list of this year's nominees, click here. 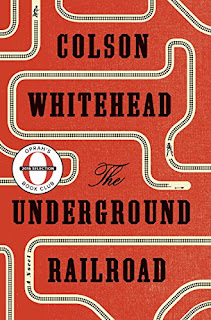 That's a long-winded introduction into three works of fiction nominated for the National Book Award that I recently read.

Expectations can be a dangerous thing. With countless raves about Colson Whitehead's "The Underground Railroad" (including from Oprah and President Obama), I was prepared to love this book.  And while I was fascinated by Cora's journey on a physical underground railroad in her search for freedom, I kept waiting to be wowed. That's not to say I didn't enjoy the book or find some of Whitehead's writing thought-provoking.

Take, for instance, Cora's revelation about stepping onto the railroad. "On one end there was who you were before you went underground, and on the other end a new person steps out into the light." The sense of hope and fear that Cora experienced on each leg of her journey was palpable. And each of her homes had its own interesting story. But still, I wasn't as taken with "The Underground Railroad" as I was with Yaa Gyasi's "Homegoing" or by Kathryn Schulz' article in The New Yorker about the underground railroad entitled "Derailed."  (Click here to read her story.) 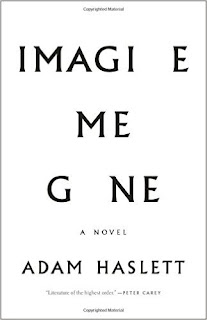 Then there's "Imagine Me Gone" by Adam Haslett. Authors are often counseled to write about what they know. That's exactly what Haslett has done in this emotionally difficult read. In an interview with NPR, Haslett shared that both his father and his brother suffered from mental illness. He acknowledged, "I'm no stranger to those states myself."

The title comes from a game John, the father, played with his kids. While out on a rowboat, he laid down, closed his eyes, and said, "Imagine I'm gone. How would you get back to shore?" At that juncture, John is fully there if the kids flounder. But it's not long before we realize that a person can physically exist and yet be absent.

I was struck in particular by Haslett's passages in which he described the feeling of the disease. John explained, "A fog blinded me, thicker than ever before. I slept in the monster's arms." Michael, the family's oldest son, said of his struggle with anxiety, "What do you fear when you fear everything? Time passing and not passing. Death and life...This being the condition itself: the relentless need to escape a moment that never ends." 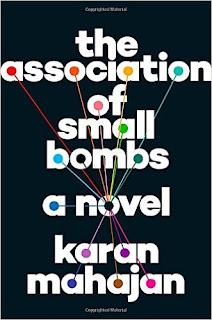 We finally come to my favorite by far: "The Association of Small Bombs" by Karan Mahajan.  From its start, I was totally into this book with its story of a "small" bomb that explodes in a Delhi market. Among the victims are the young Khurana brothers (who are killed) and their friend Monsoor Ahmed (who is injured). The book follows the story as it develops from a variety of perspectives -- the dead/injured and their families, the terrorists, and others pulled into their orbits.

"The Association of Small Bombs" is good in so many ways that it's hard to know where to start. Mahajan's use of language is compelling and at times unexpected. His description of the moments following the bombing is one example. "...people collapsed, then got up, their hands pressed to their wounds, as if they had smashed eggs against their bodies in hypnotic agreement and were unsure about what to do with the runny, bloody yolk."

Mahajan also reveals to readers some of the harsh realities of life in India. The Khuranas lie to people about what their sons were doing in the market, saying that they were picking up a watch rather than an old TV that had been repaired too many times to mention. Why would they lie in the midst of this tragedy? In a society that has a caste system to this day, "...to admit to their high-flying friends that their children had not only died among the poor, but had been sent on an errand that smacked of poverty...would have...undone the tightly laced nerves that held them together."

Sadly, the story also has a timeliness to it that's hard to ignore. I was in the midst of this book when the bomb went off in Chelsea, one of my favorite areas of New York. The terrorists in Mahajan's story compare the impact of small bombs to large terror attacks like 9/11, saying, "I think the small bombs that we hear about all the time...are worse. They concentrate the pain on the lives of a few."

I am rooting for "The Association of Small Bombs" to win the National Book Award this year. Admittedly, I haven't read all the nominees, but it's hard to imagine a better-crafted work. If you're in the area, Elaine Newton will be covering this book in her Critic's Choice lecture series at Artis Naples in December.  I am looking forward to hearing her insights.