Two Books that Envision the Future The world has changed so much in my lifetime. I remember getting a computer on my desk when I was a baby lawyer and thinking its primary purpose was to carry on conversations with my friends at the firm. We laughed hysterically at the pioneer lawyer who was "telecommuting" from home. Today, of course, working from home is a given, and we are lost without our smartphones. And let's not forget that self-driving cars seem to be just around the corner.

Louisa Hall has taken our technology-driven world a step further in "Speak." The book begins with a truckload of babybots being driven deep into the desert. The reader soon learns the bots have been banished for being "illegally lifelike." The Turing Test measures the ability of a computer to exhibit intelligent behavior equivalent to that of a human. These bots were functioning at a 90% level.

Hall tells her story through the eyes of several characters living at different points in history (including the near future). We meet a woman obsessed with imbuing computers with memory in hopes of communicating with her family lost in the Holocaust. There's the programmer whose creations have landed him in prison for the Knowing Creation of Mechanical Life and Intent to Endanger the Morals of Children. And, perhaps most striking, there's a teen-ager suffering the effects of having her babybot taken from her.

"Speak" is a fascinating contemplation of the emotional consequences of a world in which bots are displacing humans. Such a world might not be as farfetched as it sounds. In Japan, androids are already being incorporated into daily life. There's a hotel staffed primarily by robots (some of which look like humans, but many of which are intended to create a fun--if a bit creepy--experience, like the dinosaur who handles check-ins). There's an android newscaster and a bot manning the information desk at a department store. There's even an android "girlfriend" (which I don't want to think about). Click here to learn more about these human facsimiles. 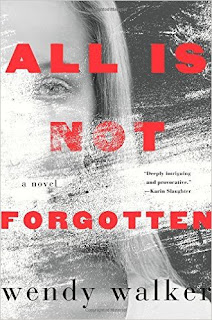 Medical advances have also affected our emotional lives. Anti-depressants that boost serotonin levels in our brains have become ubiquitous. Drug regimens that combat bipolar disease and personality disorders are available as well.

"All is Not Forgotten" by Wendy Walker thrusts us into a world in which traumatic memories can be erased. Jenny Kramer is a high school student who has been brutally raped. She is taken to the hospital where her parents are told about a drug that might eliminate her memories of the rape. The sooner it's administered, the more effective the memory repression. They elect to give Jenny "the treatment." Who wouldn't want to spare their child this agony?

While the treatment does prevent Jenny from remembering the details of the rape, it doesn't eliminate her body's knowledge that something bad has happened to it. And while she pretends that all is well, her emotional state is altered as well. Eventually--perhaps inevitably--she cries out for help.

The premise provides a unique platform from which Walker explores the emotional lives of Jenny, her parents, and Sean, another recipient of the treatment. And the story takes lots of twists and turns as the police seek to find the rapist.

My reaction to "All is Not Forgotten" was certainly affected--in a positive way--by actor Dylan Baker's narration. (If you've seen Baker on "The Good Wife" or "The Americans," you'll understand what I mean.) My attention never lagged as I wondered how things would turn out for Jenny. And Walker definitely achieved her presumed goal of making the reader consider the ethics and merits of eliminating traumatic memories rather than coming to terms with them.

The audio book included an interesting interview with the author. Among other things, Walker shared that the idea for "All is Not Forgotten" came from a 2010 article about memory science. A study in the New England Journal of Medicine concluded that veterans treated with morphine during resuscitation or trauma care were less likely to develop PTSD than those who weren't.  (To read more about this discovery, click here.)  Research on the topic continues.