I am a fan of long-form improv.  I say this with utmost confidence despite requiring only one hand to count the number of performances I've seen.

In case you're not familiar with the genre, long-form improv is essentially a one act play created on the spot around a theme suggested by the audience. At the Edinburgh Fringe Festival, Wendi and I have been doubled over with laughter during shows put on by the horribly named Baby Wants Candy.

While the speed with which improv actors come up with funny lines always impresses, Baby Wants Candy kicks it up a notch by creating a musical performance. This year's show brought us right back into the political arena we'd hoped to leave behind when we crossed the pond. The theme -- Donald Trump Goes to Hogwarts.

Being up on cultural references definitely helps your appreciation of improv, and neither Wendi nor I caught all of the Harry Potter cleverness. But I did know enough to understand the apt references to "he who shall not be named." 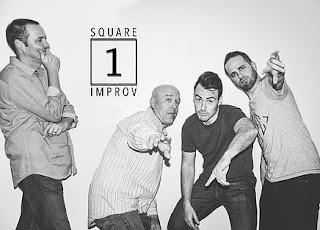 Fresh off this experience, I was intrigued when I saw an ad for Square One Improv, a group self-proclaimed as "the best musical improv in Southwest Florida." How could I resist?

My friend Gail and I headed down to Fort Myers' Laboratory Theatre to check out their show. The first half was standard improv games familiar from "Whose Line Is It Anyway?" like playing the same scene with different accents or attitudes.

Part of the fun of an improv show is yelling your ideas to the performers. I am generally not quick enough to think of something funny, but I did respond to their request for an embarrassing incident. My mind immediately harkened back to a morning in the late '80s when I decided to walk to work after a bit of a late night. I had gone several blocks before I realized that people were looking at me funny because the back of my skirt was tucked into my pantyhose.  (I know, there are many things wrong with this picture -- and that's without adding the sneakers and inevitable shoulder pads of the era.)  While the guys admittedly couldn't draw on their own experience, they did an admirable job of incorporating this scenario into an Irish drinking song.

But it was the second half of the show that really had me laughing. During intermission, audience members posted suggestions for the theme of the 30-45 minute play that would be created before our eyes. A recent convert to "The Walking Dead," I thought a zombie apocalypse would be fun. But the audience was more in the mood for a romance -- a la "Fatal Attraction."

The speed with which the guys developed their roles was pretty amazing. The set-up was a businessman (Dan Klein) has to satisfy the desires of a strong woman (Scott Beatty) in order to get his promotion. His naive wife (Gregory Sofranko) just wants a bit more time with him. Shaun Johnson assumed a number of hilarious roles, including a hairdresser, a butler of sorts and the wife's sister.

Again, cultural references played a part in the hilarity. Obviously, if you weren't familiar with "Fatal Attraction," you wouldn't have known where the story was going. My favorite bit was when Shaun, as the sister, said that the Dixie Chick's song "Good-bye Earl" kept going through her head and that maybe they should just kill the husband. All the wife had to do was say "Earl" and the deed would be done. Music not being my forte, it was amazing I knew the Dixie Chicks' song related to two women resolving a domestic abuse situation in their own way. (To see a video of the song with Dennis Franz as Earl and Jane Krakowski as the wife, click here.)

Square One is made up of four guys with day jobs sharing their love of improv with local audiences. And so they are forgiven for not having the slick professionalism of Baby Wants Candy. I was a bit disappointed in the small amount of musical improv given their marketing. (Admittedly, the competition for the "best" musical improv in Southwest Florida is probably not very heated.)  But it was a fun night out, and I would definitely see them again. For upcoming performance schedules (including several at Lab Theatre), click here. Perhaps I'll see you there.