Moving Ethos Dance Theater: To Have and Uphold

Pretty much everything I know about contemporary dance comes from watching "So You Think You Can Dance." The beauty and power of the dance Travis Wall choreographed to "Say Something" by A Great Big World is forever etched in my memory. And so when I read that Moving Ethos Dance Company would be performing in Urbanite Theatre's intimate space, I persuaded Janice to join me in checking it out. If a single number had even a sliver of the impact of the Travis Wall piece, it would be worth the price of admission. 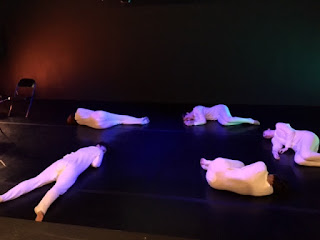 When we entered the theater, we found the six dancers tucked into onesies lying on the stage. I was intrigued. How this fit with the upcoming performance was an obvious question, as was how they would leap into action after being prone for a good half hour. It all became clear (well, sort of) once the show began.

As the music began, the dancers got up, stripped off their clothes (revealing red lingerie and, in the case of the one male dancer, red briefs), made their way to the wall where multiple sets of the same attire were hanging, and got dressed. They moved first to chairs (which we later learned represented the workplace) and then to a rowdy scene culminating in an argument between two of the women and a slap. Their clothes were shed as they climbed back into the onesies and repeated the chronology five more times. 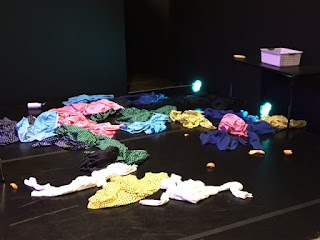 It didn't take long to figure out the "dance" was a replica of the daily rat race we have all experienced. I was struck by the ability of the dancers to duplicate their facial expressions and physical movements each time. One dancer had a unique little hop as she got her onesie back on. Another looked into the distance as she seemed to contemplate the next day before heading to sleep.

By the end of the number, clothes were strewn around the room where they stayed until the end of the performance. (The orange peels seen in this picture didn't come until later.)

Two other numbers particularly struck a chord with me.  In the first, the dancers were chaotic as they moved and spoke. The words of one woman were the loudest as she declaimed Trump and his rhetoric. She mentioned the wall he wants to build and the proposed ban on Muslims. She posited that his way to "Make America Great Again" involves rolling back the clock to the days of segregation. In the talk-back after the show, the choreographer referred to the piece as their "Trump PSA."

The second piece was a commentary on the struggle involved in maintaining a relationship. While the work began with two separate individuals, it wasn't long before Victoria and Jessica were entwined in a variety of seemingly impossible positions. This wasn't a couple coming together in harmony, but a pair fighting their way through their issues to remain together. The message was clear: relationships take work.

During the post-show talk-back, an audience member offered his one word description of the performance: "endurance." That seemed just right, on both physical and emotional levels.


Among other things, the dancers talked about preparing for the show. Choreographer Leah Verier-Dunn's first assignment had them constantly in motion for a full hour. Then they had to keep moving for an hour while always touching another dancer. Finally, they had to move and continually repeat a 16 count phrase. One dancer shared her amazement at the range of feelings this training evoked. One moment she felt she could go on forever; the next she thought she couldn't make it another second but knew she had to power on.

The show pushes the dancers emotionally as well. Most, we learned, were uncomfortable at first with speaking while dancing. "We talk with our bodies," one dancer said. Verier-Dunn commented it was when she felt discomfort from the group that she knew she was on to something. "What you resist is often what you need to do," she said. So true.

Kudos to Moving Ethos for bringing such a unique and powerful performance to the stage. I am looking forward to seeing their work in the future.