A Simplistic Look at East Berlin 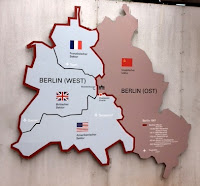 Remember the line "Don't know much about history..." from Sam Cooke's "What a Wonderful World"?  Well, that's kind of how I felt being in Berlin. Of course, we all know about World War II and the Holocaust. But the whole Berlin Wall/Cold War thing was a bit sketchy. Read on for a few things I learned while in Berlin.

While the United States/United Kingdom and Russia were uneasy allies against Hitler during WWII, the superpowers didn't waste any time staking out their claims to the hearts and minds of Germans (especially Berliners) after the War.  Pursuant to the 1944 London Protocol, Germany's borders reverted to those in effect before the War. (Austria and the Sudeton region of Czechoslovakia had been annexed by Hitler.) Germany was then divided into three occupation zones. Berlin itself was divided into East Berlin (controlled by Russia) and West Berlin (controlled by the US, UK and France). Whether you were subjected to Soviet rule or ruled in a democratic manner was dictated solely by where you happened to make your home, with families split willy nilly.

By 1949, it had become clear that the Western Allies and Russia had irreconcilable world views. Russia established the German Democratic Republic, with East Berlin as its capital. Checkpoint Charlie and Checkpoint Bravo were established by the Allied Forces to process military units and as places to display a show of military force. (Today enterprising enterpreneurs at the Checkpoint Charlie site offer paid photo opps to jet-lagged tourists.)

Prior to the Berlin Wall being built, more than 3.5 million East Germans escaped to the West. Fed up with losing so many people, the Berlin Wall was constructed in 1961. East Germany officially called it "The Anti-Fascist Protective Wall." (Yes, the Western Allies were characterized as fascists.) The West Berlin government nicknamed it the "Wall of Shame."

While I thought of the Wall as just a concrete barrier, there were actually multiple obstacles. The additional hurdles included an anti-vehicle trench, an illuminated control strip, control towers, dog patrols, tank barriers and an electrified signal fence. These additional impediments explain why the Strelzyk and Wetzel families attempted their escape using a hot air balloon, which we saw at the DDR Museum. (The movie "Night Crossing" with John Hurt and Beau Bridges tells their story and is available on Netflix.)

Our visit to the DDR Museum provided some other interesting information about life in East Germany. Following the construction of the Wall, U-Bahn and S-Bahn metro stops in East Berlin were closed and became known as "ghost stations."  (The tunnels remained open, so East Germans could hear the trains traveling to locations inaccessible to them.)

Public transportation did continue to exist in East Berlin, though. In 1966 fare collectors were were eliminated from the system. Passengers were required to purchase a ticket before heading onto the bus or train. But the machine was designed in a way that enabled passengers to get a ticket without actually making payment. The theory was that "social control by other passengers would guarantee honesty."  That didn't work so well, though, and "collective fare dodging" became a sport.

To this day, there are no fare collectors in Berlin. Bus drivers barely took a look at Wendi's and my passes (and we could have gotten on through the rear door of the bus in any event). The subway stops are wholly unmonitored.

We learned some other interesting tidbits at the DDR Museum as well. In order to train East German children at a young age about social education, they had collective potty breaks using a "potty bench." All the children had to remain seated until everyone had done their business.

Children were prepared for battle from a young age. Rather than play toss with a ball, they were given wooden hand grenades. They also counted tanks and soldiers as part of their basic math education.

And so concludes my series of posts about our visit to Berlin. If you've gotten the sense that I loved this city, you're right. Its history is powerful and made me realize--once again--how lucky I am to have been born in the United States. And the art is amazing. We didn't even have time to explore Museum Island, home to five museums with a focus on antiquities. Nor were many of the contemporary art galleries open when we were there.  A return trip to Berlin is definitely in my future.