More from the East Side Gallery


One of the many cool things about Berlin's East Side Gallery is that artists from 21 countries participated in its creation. Walking the remaining mile of the Berlin Wall is a visual ode to freedom.

I had the chance to talk with Mary Mackey, the only U.S. artist with a work in the East Side Gallery. Mackey was living in London when the Wall came down and visited Berlin to participate in history in the making. She was so energized that she went back to London, sold all of her things, and moved to Berlin. Once there she saw an ad in a Village Voice-like magazine seeking artists to paint murals on what would remain of the Wall. Although more a photographer than a painter at the time, she jumped at the opportunity. Her painting was inspired by the colorful faces of Thierry Noir (another artist who participated in the project and was purportedly Berlin's first street artist).

Mackey painted her "Tolerance" in the summer of 1990 when the destruction of the Wall was ongoing. (The Wall wasn't actually demolished until unification of East German and West German currencies into the Deutschemakr.) Most artists had completed their works by then, so Mackey also took on the role of official photographer. In 2014, PBS filmed a documentary about the Colorado artist's involvement. I am eagerly awaiting my copy of the DVD.

Both Mackey and Margaret Hunter (whose work "Joint Venture" was the subject of a prior post) had stories to tell about artist Birgit Kinder. Hunter shared that on her first day at the Wall, Kinder "jauntily drove her little Trabi car up onto the pavement in front of me, asserting that she wanted to make a painting too."  Once permission was granted, Hunter gave Kinder one of her allocated spaces. Kinder quickly sketched out this image of her Trabi bursting 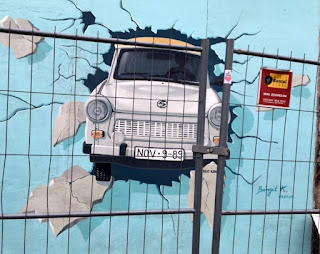 "Test the Best" is particularly iconic since Trabis were the car most likely to be owned by an East German -- typically after being on a waiting list for 11 years. Trabis are also famous for having been employed in escape attempts by East Germans, with secret compartments created in the trunk or under the seats.

Mackey's story about Kinder also reveals the day-to-day hardship of life in East Germany. After the two met, Mackey wanted to make plans with Kinder to get together. She asked for her phone number. "We don't have a phone, " Kinder told her.  "But how do you communicate?" Mackey asked, a bit bewildered. "We write letters." 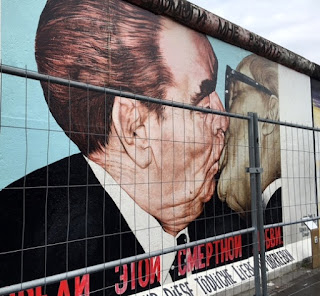 "My God, Help Me to Survive this Deadly Love" (aka "The Kiss") was one of my favorites in the Gallery. In case you're wondering whether Soviet leader Leonid Brezhnev and East German President Erich Honecker actually locked lips, the answer is yes. At the time, fraternal kisses among socialist leaders were common. This smack did, however, have a bit more vim than usual. (In case you haven't seen the mural of Trump and Putin kissing -- called "Make Everything Great Again" -- by Lithuanian artist Mindaugas Bonanu or the original photograph of Brezhnev and Honecker, click here.)

Much of the East Side Gallery is now behind a chained link fence. Its intention to keep people from the Wall is not without its irony. But it does seem necessary to enable viewers to enjoy the murals without permanent visitor commentary. (Mackey recalls actually seeing people pour from a tour bus onto the street with black markers in hand when the paintings were barely dry.)

Due to graffitization, the East Side Gallery has been renovated twice since its completion in 1990.  In the first renovation, a group of artists employed by the city of Berlin cleaned up the paintings. In 2009, the original surviving artists were invited back to recreate their murals.  They even received payment for their work. More importantly, though, it was an opportunity for this unique community of artists to appreciate what they had created.

"The Wall Jumper" was New Zealand artist Gabriel Heimler's contribution to the Gallery. In an email exchange, Heimler told me the image reflected his own life as he had lived on both sides of the Wall.  His intention was to highlight human potential. He shared the difficult logistics of the project in a time of chaos. The artists had to provide their own materials for their paintings. Because he didn't own a car, Heimler transported all of his gear (including a ladder) by bike. (Since then, the character has made his way to New Zealand. Click here to see "The Mover.")

For more images, go to the East Side Gallery's official website by clicking here. Or better yet, make a trip to Berlin and see the Gallery for yourself.