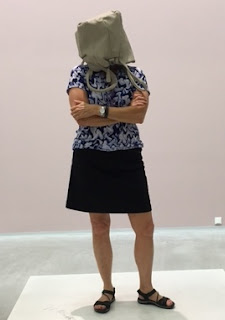 Jetlagged yet excited to be in Berlin, Wendi and I stumbled into the Berlinische Galerie. Art was definitely on our agenda for our time there, and there was an exhibit about Art in Berlin from 1880-1980 that I was eager to see. But that exhibit paled in comparison to the sheer fun of Erwin Wurm's One Minute Sculptures.

Once we entered the museum, we could see a room with people in weird poses laughing and taking pictures. What in the heck was going on?

There were approximately ten stations (for lack of a better word) with various paraphernalia and drawings showing the pose to be adopted.  After lying on the ground on a bunch of tennis balls (incredibly uncomfortable), I quite literally became a bag lady.

We posed holding books in contorted ways and with our legs through a hole in a sofa. We tried to balance a bottle of toilet cleaner on our heads. We nearly lost it when Wendi couldn't figure out how to get her head through a hole intended for an arm.  (As I said, we were jetlagged.)

We even had a chance to be in a doghouse. (I was only slightly disappointed that the set-up didn't call for me to stick my head out the other side.) 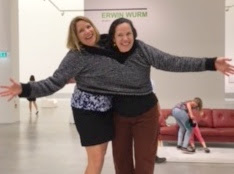 Edwin Wurm is an Australian artist who has been creating his One Minute Sculptures since the 1980s. The organization Public Delivery describes the creations as "a sculptural variant of situation comedy because they unleash a similar effect: usually funny, often embarrassing, occasionally flowing with pathos."

Wurm recognizes the humor in the works, but his intention goes much deeper.  "It is about how we see ourselves in the world," he said, "And a part of us is just ridiculous." Many of his sculptures (although none in this exhibit) have a sexual component, with "bumps" protruding from trousers and the like. 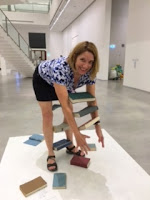 Wurm has noticed cultural differences in the way people approach the sculptures.  Americans, he noted, are very open to the concept (with Wendi and me being a case in point).  The Japanese also reportedly love implementing the sculptures, while Germans and Austrians approach them with caution.

The experience was my first opportunity to be part of a performance art piece this vacation. It wasn't my last, however. One of the shows we saw at EdFringe was called "(I Could Go On Singing) Over the Rainbow," with FK Alexander as Judy Garland.  For an hour, audience members stepped up and Alexander took their hand, gazed into their eyes and sang "Somewhere Over the Rainbow" to music created by a local "noise band."  While it sounds strange, the experience--both watching and participating--was intimate and engrossing.  (We learned in another show that a study has shown that people often fall in love with one another after gazing into each other's eyes for four minutes. Luckily, Alexander's rendition fell under the four minute mark.  Click here to read about this study.)

It all goes to show how much fun you can have if you allow yourself to be open to unexpected experiences.