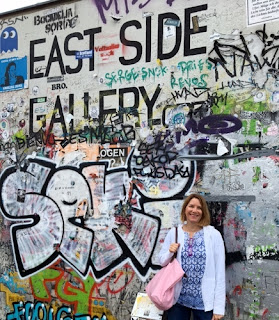 Visiting the East Side Gallery was one of the highlights of our trip to Berlin. The visual representation of what the end of the Cold War meant to artists from around the world is incredibly powerful.

Scottish painter Margaret Hunter was one of 109 artists from 21 countries who created the East Side Gallery.  Her work "Joint Venture" was one of the paintings that particularly caught my eye. Hunter graciously responded to my email asking about her involvement in the project. She also directed me to her website, which includes three fascinating blog posts about her East Side Gallery experience.  (Click here to read the posts.)

Hunter had studied in West Berlin in 1985 and, while there, exhibited her work on several occasions. She supposes this is how her name got in the mix when the project to create an open air art gallery on a preserved mile-long segment of the Wall was developed.  Not surprisingly, she jumped at the opportunity.


Hunter's "Joint Venture" is full of meaning. Her original concept was two stylized head with lines crisscrossing to suggest "the idea of communication, exchange and partnership." When laid on their side, Hunter says the heads reminded her of the strange bedfellows that the East and West Germans were to become.

Having been allocated seven panels measuring a total of 11' x 23', Hunter realized the heads alone would be insufficient to fill the space. She sought "a thread of interest to lead from the collective, the universal to the specific and individual." She began thinking about the people of East Germany and how, although happy about current developments, they were likely suffering from uncertainty as well.  Hunter says, "My supporting story became a series of small figures bending, stretching and contorting themselves to fit their new situation." The little stitches visible on the work are an allusion to cobbling Germany together. She called the work "Joint Venture," in part because the term had become a catchphrase of sorts for how Germany would operate going forward.


Even with the modified design, "Joint Venture" didn't cover all of Hunter's allotted space. She partnered with another Scottish artist to create "Hands" on the remaining panel. Hunter says her inspiration was the upraised hands of demonstrators during peaceful protests against the Wall in East Berlin and Leipzig.

"Hands" was chosen for a renovation project by students from Berlin's Potsdam University sometime in the 1990s. The work was renovated again when the wholescale conservation of the East Side Gallery took place in 2009.  In the 2009 renovation, the Wall was repaired and whitewashed, with the artists then recreating their work. Due to the prior conservation of "Hands," its renovation was made without destruction of the original "canvas." It is now the only painting in the East Side Gallery which has not been repainted in its entirety.

In the time between 1990 and 2009, graffiti artists had made their presence known on the East Side Gallery.  "Joint Venture" was not exempt from this treatment, which Hunter refers to as a dialogue. Interestingly, she says no large marks had been made on the heads themselves. "It seemed that they [the graffiti artists] wanted to participate in the work but not destroy it," she said.

This experience led Hunter to recreate "Joint Venture" in a gallery setting and invite patrons to layer on their thoughts about what has happened in the years since the end of the Cold War.  She reports that her idea was not immediately embraced. "People were self-conscious and averted their eyes as I tried to entice them with my box of charcoal pencils and colorful pastels," she said. Once the first brave soul commented on the work, though, others joined in. Hunter views this iteration of her painting as "yet another platform on which artist and viewer could consider the continually shifting nature of the Wall's status."

If you happen to be in Berlin in September, Hunter will have an exhibit at Galerie Listros entitled "Dialogue." The show will include a version of "Joint Venture" on which people can provide their thoughts. I wish I could be there to participate.