Back to Berlin: Memorial to the Murdered Jews of Europe 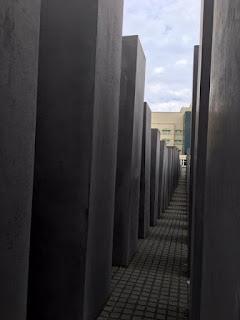 "It happened, therefore it can happen again: this is the core of what we have to say."  -- Auschwitz survivor Primo Levi

This quote greeted us as we entered the Information Center at Berlin's Memorial to the Murdered Jews of Europe. But before we got there, we spent time walking through the Memorial itself, also known as the Field of Headstones. The Memorial consists of 2,711 concrete headstones that vary in height. While in rows, they aren't entirely uniform. The land beneath them is slightly sloped, leaving you feeling a bit off-kilter.

A friend from Punta Gorda shared his experience of the Memorial with me, saying he found the way people walking through the Memorial suddenly disappear from view unsettling.

For me, its impact was different. First, it reminded me of Richard Serra's art installations that I had recently seen--and fallen in love with--in New York. It turns out this resemblance wasn't coincidental -- architect Peter Eisenman collaborated with Serra when developing his design. (Serra's involvement is not as well-known as it might be as he exited the project after Eisenman agreed to certain design modifications requested by then-chancellor Helmut Kohl.) 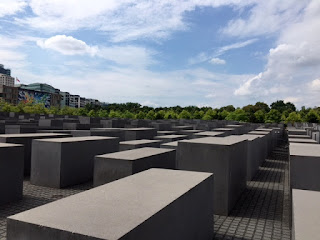 More importantly, I was confused about the dichotomy between what the Memorial represents and the way people were interacting with it.  Children ran through the stones playing hide and seek. Friends chatted about where to go for lunch. People climbed up on the concrete blocks to enjoy the view (before being reprimanded by the guards). And then there were visitors like Wendi and me who quietly took it in.

Upon reflection, perhaps this disconnect was part of Eisenman's intention. Ordinary people like these were, after all, the victims of the Holocaust. Children, lovers, friends, families.  People going about their lives until the world changed forever. 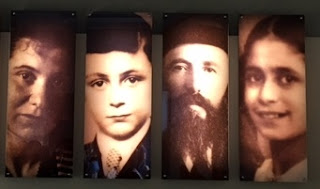 Once inside the Information Center, the tone was uniformly somber.  One of the heinous things I learned about was gas vans, mobile killing chambers which the Nazis employed before implementing larger gas chambers. 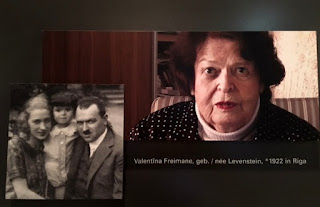 According to Wikipedia, Russia's experience taught Himmler the psychological effectiveness of killing women and children. But shooting them was really stressful for the troops. Arthur Nebe developed the idea of hermetically sealed cargo vans into which carbon monoxide would be pumped. Passengers would die from a combination of carbon monoxide poisoning and suffocation. This solution wasn't ideal, though, as it took nearly 20 minutes for death to occur and the drivers were bothered by the screams.

The Center also included an exhibit with photos and stories about Holocaust victims. Some survived the camps; others perished.  Either way, their stories were heartbreaking. 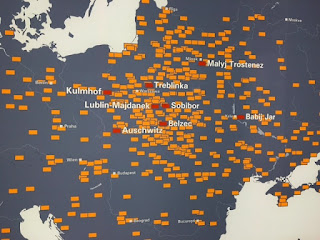 I was overwhelmed by a map that showed sites of "persecution and extermination" in Europe and North Africa. (These sites included camps, ghettos, sites of mass killings and starting points of deportations.) The density of dots on the map was hard to take in. In fact, it only identified 500 of thousands of such sites.

Needless to say, my visit to the Memorial made an impact. I'm embarrassed that I've never been to a Holocaust museum before, despite the fact there are two located right in Southwest Florida. It's not that I'm not interested. But it's all too easy to persuade myself to do something fun instead of delving into this horrific slice of history. I plan to correct this with a visit to the Florida Holocaust Museum in St. Pete in the upcoming months.  Let me know if you want to join me.