Rallying for a Cause


The world is an increasingly dark place. Terrorist attacks, conflicts between the police and civilians, and unappealing Presidential candidates make the desire to cocoon ourselves away seem more than reasonable.  What, after all, can a single voice do to change the course of current events?

Happily, my instinct to stick my head in the sand isn't shared by everyone.

Eliza Grisanti is the 15 year-old daughter of my long-time friends Suzanne Fawbush and Chris Grisanti.  I was surprised to get a Facebook friend request from Eliza and even more surprised to receive an invite from her to participate in an assault weapons protest that coincided with my visit to New York. When I hit the City, I learned Eliza and her friend Alex were the planners-in-chief of the event, which was envisioned as a rally during which petitions seeking reinstatement of the federal ban on assault weapons would be signed followed by a march down the sidewalks of Fifth Avenue. When I asked Eliza why they were organizing the rally (which took place two weeks after the Orlando massacre), she simply said, "We were tired of just talking about the issue."

I mentioned the event to our mutual friend Andrea over dinner. "I hate to ask this," she said, "But do they have a permit?"  Hmmm.  That wouldn't have crossed my mind, so what were the chances they were on top of it?  But when I raised the question with Eliza, she assured me it had all been taken care of.  Not only had the City confirmed that their plans did not necessitate a permit, but two cops had been assigned to them for the day.  I was impressed. 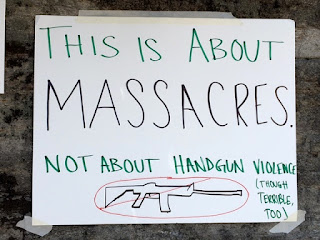 The girls had been busy making posters to alert people to the reason for the rally. Petitions to Paul Ryan and the entire U.S. Congress had been drafted. Local media had been contacted, as well as their classmates and teachers at Spence. They were ready to go.

The morning of the protest dawned sunny and bright. As high noon approached, a group gathered on the corner of Fifth Avenue and 91st St. It was a fascinating study in activism.

I loved watching the enthusiasm and earnestness of the girls as they approached people with a request to sign their petitions. (They actually had four separate petitions to be signed; two quickly fell by the wayside as they figured out getting all of them signed was too cumbersome.)  Some protesters hung back, uncomfortable with getting up close and personal. Everyone intuitively understood that a polite "ask" was the way to go rather than any kind of hard sell. 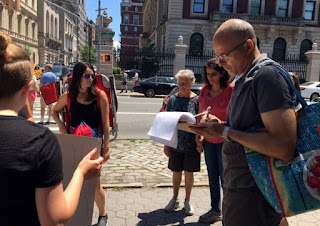 Passersby responded much more favorably than I would have anticipated. Of course there were lots of people who brushed them off saying, "Not today" or "maybe later." (This is my own favored response when approached. When you're the one making the request, you realize how lame these replies sound. Maybe tomorrow you'll be opposed to assault weapons in the hands of every Joe on the street?)  Several people passed by only to come back once they processed what was being said.

At one point I noticed Suzanne deep in conversation with a man who'd stopped to talk. I assumed they were mutually bemoaning the proliferation of assault weapons in our country. Instead, he wanted to share that he has a semi-automatic weapon locked and loaded at the ready in his closet for when "they come for us."  Who, she asked, is they?  The government, of course.  After a few minutes, they agreed they weren't going to see eye-to-eye on the issue, and he went on his way.

Eventually, Eliza and Alex decided to forego the march and focus on getting signatures for the petitions. By the end of the day, more than 300 people had signed in support of the ban. They will use what they learned from their experience when they stage another rally once school is back in session. They are optimistic about their ability to raise awareness and spur others to join their fight.

As we move into the heart of the election season, let the passion and commitment of these young women inspire us all.