I read both a fair amount of books and a fair amount about books.  Perhaps not surprisingly, there's a significant amount of overlap in the books being lauded. It's too bad my taste doesn't always parallel that of the critics.

Chris Cleave"s "Everyone Brave is Forgiven" received a fair amount of press before it hit bookshelves in May. Having loved  "Little Bee" and "Gold," I couldn't wait.  But the tone was totally different than that of his prior works. For me, the characters' incessant wisecracking detracted from the intensity of the WWII story. (I suspect the fact that the book is based on his grandparents' own wartime romance has a lot to do with the change.)

Noah Hawley's popularity stems in part from his status as creator and writer of the "Fargo" TV series. His "Before the Fall"--a book about the investigation into who's responsible for a plane crash--is a page turner, but Hawley could stand to watch a few more episodes of "Law and Order." I set aside his "The Good Father" when the defendant's counsel noted they bore responsibility for proving his innocence beyond a reasonable doubt. "Before the Fall" similarly suffers from a basic legal error -- in this case a ridiculous search and seizure without the slightest whiff of probable cause. 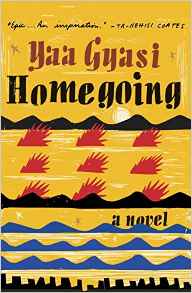 But the third new release to make it into my hands was the charm -- Yaa Gyasi's debut novel "Homegoing." Gyasi starts her book with an Akan (Ghanese) proverb that reads: "The family is like the forest: if you are outside it is dense; if you are inside you see that each tree has its own position." The proverb seems to have been created for use as this book's epigraph.

"Homegoing" tells the story of eight generations of a Ghanese family. The chapters alternate between the family's two lines, each focusing on a different person. (I found myself not only referring frequently to the family tree but annotating it to keep track of what had happened.)

The book begins in the 1770s with the birth of Effia in Fanteland. It is a time when the Fante and Asante tribes are rivals for power. The British trade goods with the Fante, sometimes in exchange for a young bride. Effia hopes to be wed to Abeeku, the new chief of the village. But her mother is determined to marry her off to a white man. She warns Abeeku, "She has the body of a woman, but something evil lurks in her spirit...If you marry her, she will never bear you children. If the white man marries her, he will think of this village fondly, and your trade will prosper from it." And so Effia is forced to leave her village to take up residence in the Cape Coast Castle with her British husband.

We then meet Esi, a 15 year-old being held captive in the dungeon of the Castle. She sometimes escapes into her past, a place where her father was an Asante warrior and men brought offerings for her hand in marriage. "When she wanted to forget the Castle, she thought of these things, but she did not expect joy. Hell was a place of remembering, each beautiful moment passed through the mind's eye until it fell to the ground like a rotten mango, perfectly useless, uselessly perfect." Eventually, Esi is forced onto a slave ship headed to America.

Esi and Effia are sisters, although they never meet. From one chapter to the next, we learn about the lives of their progreny in Ghana and the United States. The brutality portrayed is shocking. H, for instance, is a descendant of Esi who is a slave, then a free man, then a convict forced to work in the coal mines. His "crime" was looking at a white woman. Any prisoner who didn't shovel his quota of ten tons of coal per day was beaten. After many years of hard labor, H is released. "The day the elevator shaft took him up into the light and the prison warden unshackled his feet, H looked straight up at the sun, storing up the rays, just in case some cruel trick sent him back to the city underground. He didn't stop staring until the sun turned into a dozen yellow spots in his eyes."

I found myself sitting with each person's story before moving on to the next chapter. What happens is often horrific. But Gyasi's characters retain a sense of self and pride and determination that elevates their stories well above a sad history lesson. Ultimately, Gyasi leaves the reader with a glimmer of hope.

"Homegoing" is nothing short of remarkable. It's a book that will stay with you long after you've finished the last page. Read it.