I've lived in Punta Gorda long enough that my trips to New York feel a bit like Dorothy's visit to Oz. The city is technicolor with all the people and noise and traffic and smells (especially in the summer). My visits give me a chance to catch up with friends while enjoying an arts scene unlike that of Southwest Florida. (I'm not just talking about the desnudos in Times Square, although I suppose they are an art of their own. Click here to check them out.)

Wendi and I headed to Chelsea, home to galleries galore. Once you get past the slight intimidation of walking into galleries manned by people who are mysteriously too busy to welcome you, it's a wonderful area to explore what's happening in the art world.

I fell in love with the large steel installation works by Richard Serra on display at two different Gagosian Galleries. The exhibition was Gagosian's 30th major showing of Serra's works since 1983. In fact, the Gagosian Gallery on West 24th Street was built with reinforced floors specifically to accommodate the weight of Serra's work. (His "Silence (for John Cage)," for instance, is a single 80 ton slab of forged steel lying flat on the floor of its own room.) 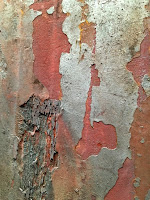 Serra has said he only moves forward with a work once he has determined that "walking in and through and around the piece will be something that startles him." Both "Every Which Way" and "NJ-1" more than meet this goal.

"Every Which Way" consists of 16 slabs of rectangular steel of differing heights. Wandering through the installation was an immersive experience. Although many liken the work to a giant graveyard, it felt to me more like a beautiful forest. The colors of each slab are nuanced with different tones of rust and peach and gray (a bit of which Wendi took away with her after she brushed up against one).

Serra's "NJ-1" is an example of the mazes for which he is best known. The sculpture is comprised of six ochre-colored plates of steel that stand on their own volition. Walking through the work's 14' walls feels like being deep inside a Sedona canyon. The structure has so many different angles and curves that its ability to support itself is a bit mind-boggling.  Many of Serra's works were inspired by his viewing of a ship being launched when he was just four years old. He has said that he still remembers the awe with which he watched something so massive become almost weightless. He captures this duality in works such as "NJ-1."

There were a couple of additional surprises at this exhibit. First, multiple security guards were on duty. It was curious both because none of the other galleries had guards and because "NJ-1" isn't a delicate work that one could easily harm. Nonetheless, the guards were asking people to be careful not to touch the structure. Perhaps they were there to protect against people's instinct to test the sturdiness of the structure by throwing themselves against the walls.

The second surprise was the consideration visitors gave to others' experience. We all allowed other art lovers the chance to take pictures and explore the work's nooks and crannies at their own pace. (If people proceeded through with the speed and single-mindedness displayed on New York's streets, it would be a quite different experience.)  Sharing others' respect for and appreciation of the work made my discovery of Serra's work even more special.

To get a sense of what visiting one of Serra's creations is like, watch the first few minutes of this PBS special about the artist.  Or if you happen to be in Spain, visit the Guggenheim Museum Bilbao where eight of his works are on permanent display.

While I would have been happy spending the entire afternoon enjoying Serra's art, there were many more galleries to explore. My next installment will share more of this exploration.  And here's a teaser: John Malkovich will be prominently displayed.