You may have seen on the news recently that Kim Jong-un was named the Party Chairman of North Korea's Workers' Party. There were clips of military personnel goose stepping in a celebratory march and citizens proclaiming their undying support for their leader. Kim Jong-un took the occasion to applaud the success of North Korea's fourth underground nuclear test in January. (The United Nations responded to the test with tighter sanctions against the country.) 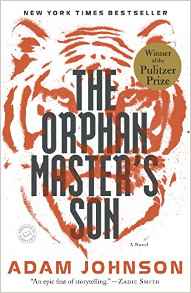 Why, you might wonder, am I mentioning this? I'm not a person who talks--or thinks--much about world politics. Historically, while I knew North Korea was on the "bad" list, I had no concept of what life is like for its citizens or how truly frightening a concept it is for North Korea to have nuclear capabilities. That changed when I read Adam Johnson's Pulitzer Prize-winning novel "The Orphan Master's Son," which has a ripped from the headlines quality to it.

We meet Jun Do, the novel's protagonist, at Long Tomorrows orphanage for boys. His father is the Orphan Master there. The facility is quite full, as parents drop their sons off on their way to the 9-27 (prison/concentration) camps that house political dissidents. (Yodok is the largest of these camps and plays a role in the book.)  Jun Do's mother is long gone; he has seen her only in a single picture treasured by his father. He assumes that she, like all beautiful women from the provinces, was shipped to the capital of Pyongyang to be married off to a favored party official.

As the oldest child at the orphanage, Jun Do "had responsibilities--portioning the food, assigning bunks, renaming the boys from the list of the 114 Grand Martyrs of the Revolution. Even so, the Orphan Master was serious about showing no favoritism to his son...When the rabbit warren was dirty, it was Jun Do who spent the night locked in it. When boys wet their bunks, it was Jun Do who chipped the frozen piss off the floor...  The surest evidence that the woman in the photo was Jun Do's mother was the unrelenting way the Orphan Master singled him out for punishment. It could only mean that in Jun Do's face, the Orphan Master saw the woman in the picture, a daily reminder of the eternal hurt he felt from losing her. Only a father in that kind of pain could take a boy's shoes in winter. Only a true father, flesh and bone, could burn a son with the smoking end of a coal shovel."

Adam Johnson catapults the reader into this world in the first three paragraphs of the book. Needless to say, this is a story that's not always easy to read. But it is always compelling and sadly educational. (I found myself doing a lot of googling to find out whether certain aspects were fiction or fact. Take for instance, the North Korean calendar, which as of 1997 is based in Juche rather than Gregorian years. Kim II-sung, Kim Jong-un's grandfather, was born in 1912, which is Juche year 1. The current year is Juche 105, which is sometimes modified with 2016 in parentheses. It's a simple example of the ways in which North Korea's totalitarian regime elevates its leaders and dictates all aspects of its citizens' lives.)

Part I of the book is titled "The Biography of Jun Do." Jun Do has no choice but to do what the government instructs him. He becomes a kidnapper, venturing into Japan to take whomever the state has targeted.  His superior, who has lost count of how many people he's kidnapped, tells him it gets easier. "Catch somebody with your hands, then let them go with your mind. Do the opposite of keeping count."

Jun Do goes to language school. He goes through pain training. He becomes a spy. In a pivotal segment of the book, he goes to Texas with a North Korean contingent. On the trip over, a colleague explains the difference between North Korea and the United States."Where we are from," Dr. Song tells him, "Stories are factual. If a farmer is declared a music virtuoso by the state, everyone had better start calling him maestro. And secretly, he'd be wise to start practicing the piano. For us, the story is more important than the person. If a man and his story are in conflict, it is the man who must change...But in America, people's stories change all the time. In America, it is the man who matters."

While there, a member of the Texan delegation asks Jun Do if he knows what it feels like to be free. "Are there labor camps here?" he asks. "No." "Mandatory marriages, forced criticism sessions, loudspeakers?" She shook her head. "Then I'm not sure I could ever feel free here," he said...."When you're in my country, everything makes simple, clear sense. It's the most straightforward place on earth."  And yet a seed has been planted that there is another way to live, a world in which individuals make their own choices.

Part II of the book is titled "The Confessions of Commander Ga." The reader is introduced to North Korean interrogation practices. A professor has been accused of "counterrevolutionary teaching, specifically using an illegal radio to play South Korean pop songs to his students." The team members are distracted when they learn that Commander Ga, a North Korean legend who has been declared an enemy of the state, has been captured and will be questioned. The story goes on from there and is told from various points of view. The action doesn't let up until the final page.

"The Orphan Master's Son" is an incredible book that tops my list of best all-time reads. Whenever I write about a book, I look back at passages I flagged to recapture what struck me. While doing so, I found myself drawn once again into Jun Do's world and had to resist putting all else aside and starting the book over. Such is the storytelling skill of Adam Johnson. I couldn't encourage you more strongly to put "The Orphan Master's Son" on your own "must read" list.

Postscript: Johnson made a trip to North Korea while writing "The Orphan Master's Son." The book includes a fascinating interview with him about his journey. BookPage also did a wonderful interview with Johnson that you can read by clicking here.