Getting Modern at the Corning Museum of Glass

When Maggie visited me earlier this year, we visited the Morean Arts Center and its striking Chihuly Collection in St. Petersburg.  She immediately put a trip to the Corning Museum of Glass on our calendar for my visit. My head is still spinning from all the visual stimulation.

While the Museum covers 35 centuries of glass making, it was the work in its new Contemporary Art + Design Wing that really grabbed my attention.  The 100,000 square foot wing features 26,000 square feet of gallery space and a 500-seat theater for glass blowing demonstrations and glass design sessions (which are on my list for next time).

The first work we came upon was Ann Gardner's "Fog" (which, of course, the photo does not do justice). The sculpture contains more than 100 mosaic-covered pods. While the square four-sided glass tiles (known as tesseree) are quite modern, they are made in the old-style Venetian manner.  Click here to see the pods in more detail.  I could almost feel the mist on my face.


Our favorite installation might have been Lino Tagliapietra's "Endeavor," a stunning work of 18 colorful blown glass boats reminiscent of gondolas in his native Venice. (The sculptural forms are open to interpretation, though, and could also be seen as a flock of birds or a school of fish.) Tagliapietra began his studies in the glass factories of Murano at the age of 11; when he was 21, he was declared a "maestro" (master).  He didn't begin developing his own work, though, until at the age of 45 when he was invited by Dale Chihuly to teach Venetian glassblowing techniques at Pilchuk Glass School in Washington State. Click here to see a more vibrant image of a larger version of "Endeavor" at the Columbus Museum of Art.

Then there was Katherine Gray's "Forest Glass," a work that--like a pointillist painting--is best viewed first from a distance. The "trees" are composed of plexiglass shelves on which more than 2000 drinking glasses have been set in a careful design. A few of the glasses are decorated with flowers or insects to add to the nature feeling. Although Gray is a glassblower, the glasses in the sculptures were found at thrift stores and on e-Bay.  The Museum's website explains, "Forest Glass is about creation and destruction, ecology, and historical glass. It refers to the history of glassmaking and its attendant environmental issues: trees—in fact, forests of them—were obliterated over the centuries so that their wood could be used as fuel for glass furnaces. In this work, Gray reconstructs some of these lost trees out of the material that destroyed them—in effect, recycling the trees with recycled glass."


The Museum's "old" contemporary gallery is also full of wonderful works. I loved their gemmaux, which are glass panels affixed to light boxes. Each panel contains hundreds of colored glass pieces that were cut and arranged by technicians known as gemmists.  Once assembled, the work was dipped in an enamel-type solution and then kiln-fired to fuse the glass. "Orpheus in Foliage" was designed by Jean Cocteau after his painting of the same name and then created by gemmists in the studio of Roger Malhere-Navarre. (Malhere-Navarre worked with painter Jean Crotti to originate the technique.)  Cocteau is credited with naming the genre as a contraction of the words gems and stained glass. (I don't quite get it either.) Crotti was a fan of Picasso and decided to replicate his "Le Coq" as a gemmail. When he showed it to Picasso, Pablo declared, "A new art is born!"  Picasso eventually created 60 gemmaux replicating some of his favorite works. Sadly, none are on public display. 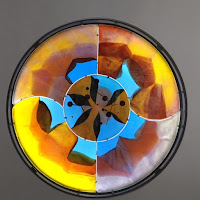 Dominick Labino's "Ionic Structure of Glass" is yet another striking work. The cast glass window measures five feet in diameter and weighs in at 350 pounds. It was commissioned by the Museum in 1979 for the internal entrance of its new building and was intended to be the first work a visitor saw. The Museum's expansion led to the work being out of view for 15 years; it was reinstalled in the gallery in 2014.  In its original placement, the structure was backlit with floodlights and required its own air vent. (Replacing a bulb led to an uncomfortable climb through a mechanical equipment room. I can imagine a serious game of rock/paper/scissors to decide who got that job.) Today LED lights enable the work to shine.

The Museum has an app to view works from the Contemporary Art + Design Wing that can be found at http://glassapp.cmog.org/#/gallery.  There's nothing like seeing the glass in person, though. If you're in the Rochester/Buffalo area, make sure to add a stop at the Museum to your schedule.