During my recent trip to Rochester, Maggie and I took time away from the bridge table for a Frank Lloyd Wright two-fer.  We spent the morning touring the 26,000 square foot Darwin D. Martin Complex in Buffalo.  The afternoon was dedicated to Graycliff Estate, the Martins' light-filled summer home on Lake Erie. The home was built at the behest of Isabelle, who was the client of record. The organic style of the 8-1/2 acre estate differs radically from the prairie style of the Buffalo residence, with nary an art glass window. The clear windows allow light to flow in and open wide to permit air to circulate on lazy summer afternoons. Nor do rooms have the dark molding featured extensively in the Martin House.


Wright's design was inspired by the home's location. The house is punctuated with balconies and porches covered with overhangs that are simultaneously stylistic and functional. (The cantilevered overhangs mimic the shoreline while creating shady areas where Isabelle could seek respite from the sun.) The stucco portion of the home is rust colored to tie in with the coloration of the local tichenor limestone. Wright even included pieces of limestone with embedded fossils in the walls to enhance the organic feel. 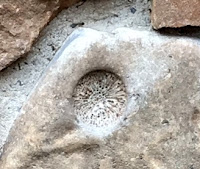 Wright's attention to detail was meticulous. The living room has doors that open to the front and back of the building that are offset to create air flow rather than a wind tunnel. The concrete in the tennis courts was dyed a reddish tint to match the terracotta roofs of the nearby buildings. And it came as no surprise that the walls throughout the property are made from the same stone used in the buildings. 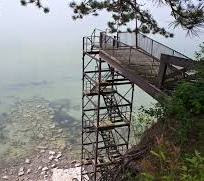 And what would a lake house be without a water feature?  A  man-made pond with a surrounding garden is situated outside of the porte cochere where people in the guest house (originally the chauffeur's quarters) could enjoy it as well. Wright wanted a second water feature between the home and the shore to further the effect of the lake flowing through the house, but Isabelle said enough was enough. The area was used instead for a sunken garden.

Bethlehem Steel built this sturdy staircase to provide access from the grounds to the water. (The bridge connecting the estate to the tower has been dismantled for safety reasons.)  Maggie and I laughed as we imagined servants balancing trays of food and beverages to serve Isabelle and her guests as they lounged by the lake.

After Isabelle's death in 1945, the Martin children put Graycliff up for sale. In 1951 the property was sold to the Piarist Fathers, a group of Hungarian priests.  The estate became a place for the priests to rest, meditate and study, as well as a home for retired priests. Not surprisingly, the Order made some changes to the buildings to accommodate their needs. The buildings were winterized. A school house was built with dorms attached to house both students and refugees from the Hungarian Revolution. And the front porch was converted into a chapel. (Wright visited the estate in 1958 and was dismayed to find that his carefully crafted design was no longer visible. He offered to design the chapel for the priests--at what cost is unclear--but they politely declined.)  The Order continued to live on the estate until 1997, when it was sold to the Graycliff Conservancy.

The property is about halfway through a $7.5 million renovation, with most of the exterior work finished. The inside definitely needs lots of TLC.  It will be fun to visit again once the renovation has been completed.
at April 28, 2016