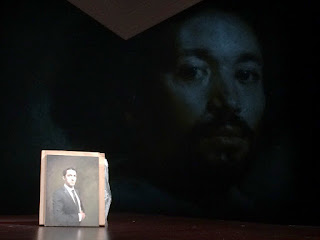 The Pulitzer Prize winning "Disgraced" opens with Amir, dressed in full lawyer regalia from the waist up and only his underwear from the waist down, posing for a sketch being drawn by his wife Emily. While the moment makes the audience laugh, it's a brilliant introduction to a play that highlights the assumptions people make about what they see.

The idea for the portrait arose after an unpleasant incident at a restaurant when a waiter treated Amir in a prejudicial manner. "It gave me an idea," Emily says. "A man, a waiter, looking at you. Not seeing you. Not seeing who you really are. Not until you started to deal with him. And the deftness with which you did that. You made him see that gap. Between what he was assuming about you, and what you really are."

Emily's concept was also inspired by her recent visit to the Met where she saw Velasquez' "Portrait of Juan de Pareja." A casual viewer of the portrait would assume that de Pareja was a nobleman based on his dress and demeanor. The fact is, though, that de Pareja was not nobility at all but Velasquez' slave and assistant. 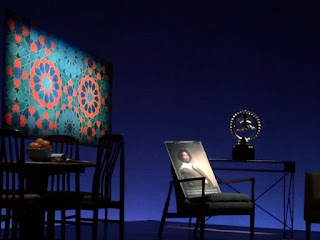 To director Michael Donald Edwards, "Disgraced" is a play about ideas such as identity, assimilation and cultural appropriation. "It's a play that has the potential to offend and upset everyone," he said. "But it's also a play that creates the opportunity to promote thought and discussion. Our job [at Asolo Rep] is to be an artistic leader in our community and to make the world in which we live a little better."

The "everyone" who might be offended includes Muslims, Jews and African-Americans, constituencies represented by characters in the play. The final character, Emily, is a white woman captivated by all things Islam, as seen in her art, her knowledge of the Quran, and perhaps even her choice of a mate.

While preparing to produce the play, Edwards met with community leaders representing these various constituencies, including a rabbi and the imam for the Islamic Society of Sarasota and Bradenton. (Edwards shared that the 20-something imam appeared at his office wearing shorts and flip flops. His surprise jarred him as he realized that, despite being immersed in the cautionary tale of "Disgraced," he had bought into the media's portrayal of what imans look like.)  A complete list of the people Edwards and others involved in the production met with can be found by clicking here. (Information is also provided about Asolo Rep's "Faces of Change," a documentary theater project that explores the issue of how faith both divides and connects us in America today.)

Although I haven't shared the plotline, you have probably gathered that "Disgraced" is an emotionally charged play that challenges audience members to consider the foundations on which their own identities are based. It raises questions about today's complicated world without providing any neat answers. Anticipating audience members' desire to talk about what they've seen, each performance of "Disgraced" is followed by a moderated discussion. At the performance Janice and I attended, cast members Dorein Makhloghi (Amir), Jordan Ben Sobel (Isaac) and Bianca Jones (Jory) joined in.

The audience did a lot of talking, but I was most interested in hearing what the actors thought. Makhloghi commented that each character has the opportunity to be both right and wrong during the course of the show's 90 intense minutes. Sobel, who is Jewish, said he was surprised that he empathized most with the character of Amir when he first read the play. And Jones' comment about the play's theme of assimilation was a simple, "Yeah, I get it."

"Disgraced" has so much hype surrounding it that I was concerned I would find it like the Emperor's new clothes, with everyone jumping on the bandwagon because it would be politically incorrect not to do so. I'm happy to report that "Disgraced" deserves the accolades it has received and then some. Ten days after having seen the play, I'm still digesting it.  And I would be remiss not to mention that the acting is terrific and the set and way the passage of time is handled are brilliant.


Postscript about Velasquez and de Pareja:  Velasquez created the painting of de Pareja in preparation for his portrait of Pope Innocent X, a work with color contrasts and compositional elements similar to those in the "Portrait of Juan de Pareja."  Velasquez later freed de Pereja, who went on to become a painter in his own right. The Ringling Museum happens to own one of his works, which is displayed in Gallery 14. The portrait of Amir (aka Darien Makhloghi) was painted by set designer Reid Thompson.
at April 11, 2016