During Garth Stein's recent talk at Copperfish Books, he unabashedly acknowledged that he loves to have a microphone in his hand. And that's okay, because he's a terrific speaker. Despite having given what must be hundreds of talks about "The Art of Racing in the Rain" since its publication in 2008, Stein's patter felt fresh, and he was thoroughly engaging. Eventually, the audience let him get on to talking about his most recent book, "A Sudden Light."

In 2004, Stein wrote a play called "Brother Jones" that was produced at a theater in Los Angeles. "Brother Jones" tells the story of the Riddell family, with the drama centering around prodigal son Jones who returns home to the family estate outside Seattle after a 24 year absence. When Stein finished the play, he realized he wanted to continue to flesh out the Riddell family story. "A Sudden Light" expands upon the play's characters and issues.

The book's protagonist is Trevor Riddell, Jones' 14 year old son who makes the journey with him from Connecticut to the Great Northwest. Trevor has spent his whole life hearing about the Riddell family's timber fortune and the family home constructed from giant whole trees overlooking Puget Sound.  But, as is often the case, a significant gap exists between expectations and reality.

The relationship between man and nature is one of the many themes explored in "A Sudden Light." Ben and Henry, two of the book's characters, share a passion for climbing trees. And when you're talking massive redwoods, gaffs and chains are required to make your way up to the canopy. In order to make the experience authentic in the book, Stein did some climbing of his own with Master Tree Climbing Instructor Tim Kovar.  (There's a picture on Kovar's website of Garth climbing, but this image gives you a better sense of what was involved.) Stein admits that he was pretty terrified at first, but said he's been back for additional climbs. To read more about "A Sudden Light" and the themes touched upon in the book, click here. 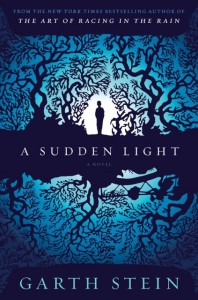 Stein also shared his thoughts about the writing process and the "inevitability" of a story. He compared writing a book to pushing a rock uphill. At first, his ego is in charge as he tells the story he envisioned. The point comes, however, when he gets to the top of the hill and the story is propelled forward of its own momentum. His job, he said, is to step aside from his own preconceptions and follow the story where it leads.

Stein also veered ever so diplomatically into some thoughts about the ongoing debacle that is our presidential race. He talked about the importance of civil discourse and respecting each other's ideas whether or not you agree with them. His analogy was a book group with dichotomous views on its latest read. An exchange of opinions can be passionate without becoming personal.  Sadly, when it comes to presidential politics, that line seems to have been crossed some time ago.