When Garth Stein's people contacted Copperfish Books to see if they'd host him for a talk while he was in the area, they jumped at the opportunity. What better way to get people into their fabulous new space than hosting the international bestselling author of "Art of Racing in the Rain"?  My friend and Book Expo companion Wendi was in town, and we snagged front row seats for Stein's talk. It was terrific. 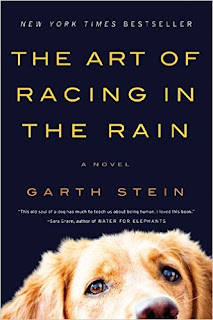 Although Stein was technically promoting his latest book, "A Sudden Light," he kicked the event off with a discussion of "Art of Racing in the Rain." Here are some of the tidbits he shared:

--In Stein's former life, he was a documentary filmmaker. When watching a Mongolian documentary entitled "State of Dogs," he learned of the Mongolian legend that dogs can come back as humans in their next incarnation if they are ready. He later heard poet laureate Billy Collins' "The Revenant," in which a dog talks to his owner from the grave. (Click here to hear Collins recite the poem, which is decidedly not what most dog owners think of their dog's feelings towards them.)  Taken together, Stein came to believe that the smartest person in the world might in fact be a dog who can't talk or open a door. Enzo was born from this idea.

--Stein's original name for the dog was Juan Pablo. At the time he was writing the book, his wife was pregnant. In one of those "what should we name our child" conversations, he proposed the name "Enzo" if the baby was a boy.  His wife didn't think "Enzo Stein" had quite the ring she was looking for, though, and suggested he use the name instead for the dog in his book.  Marital negotiation at its finest.

--Stein had a lot of difficulty finding an agent willing to represent him in the sale of this book. The idea of a book narrated by a dog sounded too alternative and hard to market. "What do you know about being a dog?" his agent asked.  (Stein responded by asking what Victor Hugo knew about being a hunchback.) He fired the agent and went on the hunt for someone more open-minded. He was sharing his frustrations at an author event when Layne Maheu piped up. "You should talk to my agent," he said. "He's working with me on a book narrated by a crow!" The rest is history.  (FYI, Maheu's novel is called "Song of the Crow.") 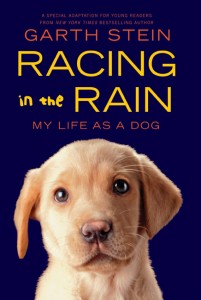 --Enzo has proven so popular that Stein has written a book for middle schoolers ("Racing in the Rain: My Life as a Dog") and picture books for younger kids ("Enzo Races in the Rain!" and "Enzo and the Christmas Tree Hunt!")  The middle school adaptation required a few changes to make it more age-appropriate, but Stein drew the line at changing Enzo's references to "urinating" to "peeing." Enzo, he said, would never use that word.

--"The Art of Racing in the Rain" was on the New York Times Bestseller List for more than 156 weeks and has been published in 25 languages. Most recently, a Slovakian Reader's Digest version was published.

Next up will be Stein's insights on the writing process and his inspiration for the book he's actually promoting -- "A Sudden Light."
at March 24, 2016