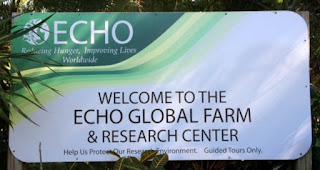 I always take Maggie on an unexpected outing during her visits. Our trip to Solomon's Castle a couple of years back set a high bar for pure entertainment (not to mention kitsch). This year's outing found us at ECHO Global Farm in Fort Myers.


ECHO's mission is to develop sustainable farming techniques that use low or no-cost technology for dissemination to communities combating hunger. ECHO has impact centers in West Africa, East Africa, Thailand and the Caribbean. Its network extends to 4500 missionaries and church organizations in those regions. (Maggie and I were a bit concerned there would be proselytizing on the tour, but the guide focused solely on the agricultural aspects of the farm.)

ECHO's location was carefully selected for having the worst soil in Florida, an environment similar to that of the countries where ECHO's solutions are made available. Our guide referred to the 50+ acre farm as a "living classroom." Interns receive 14 months of training before heading out into the field. More than 250 students have been trained at ECHO.

Our first stop was a lesson in the many uses of bamboo. The hard wood can be used to build houses, barns, fences and bridges.The trees grow quickly--five to six feet per year--and their foliage can be used to feed animals. We saw structures throughout the facility that had been built by residents using "appropriate technology;" i.e., tools and materials readily available at essentially zero cost.

We learned that 75% of the world's food is generated from 12 plants and five animal species. ECHO's small duck and tilapia pond was one example of a sustainable food source. Ducks were chosen because their eggs have the highest level of protein while tilapia are the fish of choice because they reproduce when quite small. The ducks are housed in a wire cage where their droppings fall into the water and grow into algae. The tilapia live off the algae. According to our guide, many villages would be able to live off the food produced from the tiny pond.

The farm also raises goats, rabbits and turkens (a hybrid turkey/chicken). A mature nanny goat can produce five-six pounds of fresh milk daily. One rabbit will provide a meal with protein for a family of five (and, of course, rabbits breed frequently).  And the turken has a third less feathers than a regular chicken, with the excess energy expended to create bigger eggs and meatier legs. Chicken poop is also an excellent fertilizer. These animals come in handy for the interns, who are required to eat one week each month only from what they can find on the farm.

The farm has different areas whose environments mimic those of the regions where ECHO's work will be shared. One area featured raised beds where crops can be planted in a way that will protect them from drowning during monsoon season. (This is the way strawberries are grown here in Florida.)  Another area had steep land where terraces had been created using rocks, rail ties and deep rooted plants.  Plants on trellises are found throughout the farm because growing them in this way enhances their ability to survive and thrive. 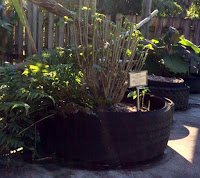 Perhaps my favorite farm area, though, was the urban environment. Again, ECHO looks for materials readily available for would-be farmers, and they've landed upon discarded tires as a convenient garden planter. Once the side walls are cut out and they are filled with soil, tires are a habitable environment for a backyard or rooftop garden. It seems kind of brilliant to me.

ECHO has a separate tour relating solely to "appropriate technology" that I'm sure would be quite fascinating. We learned that twenty types of water pumps have been developed that require no electricity. We also were given a demo of a biogas digester created from an old barrel that can provide five months of fuel for a family of five.The creativity would make McGyver proud.

So much information was presented that my head was spinning by the time our 90 minute tour was over. I came away amazed at the ingenuity and selflessness of people dedicated to helping alleviate world hunger. It really is quite an operation.

If you're interested in learning more about ECHO, their Global Food & Farm Festival on March 19 would be the perfect opportunity. According to ECHO's press release, "the festival features samplings of exotic foods, a tropical rain forest demonstration, tours of the farm’s 300-variety seed bank and fruit tree arboretum, and educational programs about the connection between food and cultures. Farm visitors will have the opportunity to crush sugar cane and peanuts and taste the results. And there will be live 30-minute cooking demos on stage, featuring a very diverse group of local chefs. At the end of each session, the chefs will serve the dishes they’ve prepared.” It sounds like a great way to spend an afternoon.