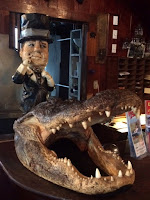 When I mentioned to people that I was meeting some friends for an overnight in Everglades City, the most common response was a bemused "Why?"  It's not exactly a locale known for arts and culture (Clyde Butcher's amazing photographs aside). But Pam had a hankering to do some canoeing there before she and her husband move to South Carolina. Pat and I were happy to go along for the ride.

We started off our adventure at The Museum of the Everglades, which is chock-full of interesting information. Everglades City was founded as a company town by the Collier Company. Barron Gift Collier (his real name) had amassed a fortune in the advertising business. When he came to Southwest Florida, he acquired more than a million acres of property. In exchange for having a county named in his honor, Collier agreed to complete the portion of Tamiami Trail that crossed the Everglades. The difficulty of the project was likened to that of building the Panama Canal.

Everglades City was envisioned as a utopian community. It had its own hospital, library and bank (complete with Collier Company scrip that could be used at local stores.) With a population greater than that of Naples, Everglades City served as the county seat until the 1950s.

Collier was a fascinating character. In addition to his role in completing the Tamiami Trail (a project that eventually bankrupted him), he also was influential in persuading the U.S. government to join Interpol and served as the public safety commissioner of New York. In a time when the streets of New York City were suddenly populated with horse-drawn carriages, street cars and automobiles, injuries from jaywalking were a serious problem. Collier's anti-jaywalking campaign reduced the number of accidents by 50% in the first 90 days. (As a veteran NYC jaywalker, I can appreciate this issue. While I never had a problem when I lived there, the ever-increasing bike traffic in the City now makes stepping off the sidewalk a dangerous proposition.)

Then we were off to the Historic Smallwood Store. This vintage trading post is essentially filled with all the junk that Smallwood was never able to get rid of. (This isn't just my perception. Apparently, 90% of the stuff in the store dates back to when it closed in 1982.) Smallwood's grandson recited some facts about his grandfather in a way that made me feel like it was an imposition for him to take our $5 to come into the "museum." To me, the store wasn't worth the price of admission. I did, however, enjoy getting Pat to pose with a kind of creepy wax figure of Grandpa Smallwood.

We woke Saturday morning to a glorious day with sun and no wind. Our ranger-led canoe trip was on!

Although I'm comfortable in a kayak, I was nervous about canoeing. When Pam signed up for the trip, the ranger drilled her about our level of experience and cautioned her that we had to be able to "self-save" if we tipped over. Pam sent us "how to canoe" videos as homework for the outing. And then I started thinking about gators.....

Of course, it turned out to be no problem at all (unless you count Pam's and my total inability to paddle in a straight line.) Chokoloskee Bay is quite shallow, so we have no idea what the whole "self-save" fuss was about.

Once we got settled in, it was fun to be on the water. The highlight was two dolphins cavorting near the mangroves. It seemed out of context for Flipper to join us instead of a ravenous alligator, but that was just fine. 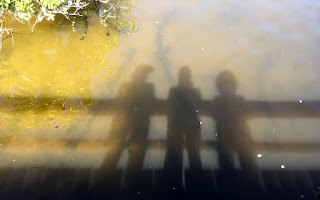 Our lunch stop on Sandfly Island was combined with a walk for those willing to brave the mosquitos and no-see-ums (which were seriously irritating). The island is actually a "shell mound" built by the Calusa Indians. It's a pretty amazing engineering feat for 2,000 years ago. I also learned that hearts of palm come from cabbage palm trees.

It was another wonderful outing with wonderful friends. We're already plotting our get-away for next year. And while a different venue is in order, I'd actually like to get back to the Everglades sometime. There's a 15 mile bike loop in Shark Valley that sounds like fun. And I've always been intrigued by the idea of Clyde Butcher's swamp walks.  All in due time.
at January 20, 2016