Behind the Scenes at FST: Outside Mullingar, Part 2 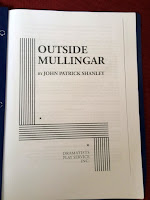 I started my second session of Behind the Scenes with my nose up to the window like a kid on the outside of a candy store. Although I had arrived on time for the class, the director inexplicably started the read-through well before the appointed time. Those students who had arrived early were sitting comfortably in their seats listening to the actors while I (and many other students) stood outside the glass door straining to hear.  I'm not sure who was more aggravated -- me after driving an hour to get to the class or the woman who'd been sitting outside in her car checking emails until class time.

Once the actors finished the first scene, the director let the rest of us into the rehearsal studio.  Luckily, I'd done my homework and read the script in advance, so I had no problem picking up the storyline. It didn't take long for my irritation to transform into pleasure.

It was hard to believe these actors had only met that morning and were doing their first read-through together. The reading was as polished as the readings at new play festivals that have had the benefit of hours of rehearsal time.  Most of the actors were still "on book" (reading from the script) at least part of the time.  (We had learned last week that a request to come into rehearsals off book requires an additional week of pay for the actors. Given the economics of theater, this rarely happens.)

I don't know why I was surprised the actors read their lines using a dialect. They are professionals, after all, and the play is set in Ireland.  None had adopted a heavy accent that made their words incomprehensible. Instead, they used pleasant brogues that transported me to their part of the world.

It was interesting to watch the actors who were not characters in the scene being read.  I was most taken with the way George Crowley, who plays Tony, looked off into space. You could tell, though, that he was fully engaged.  In fact, he was in tears after the final scene, and I'm not talking just a sniffle.  It was the type of reaction that would have become a full-out bawl in the privacy of his own home.

I'm looking forward to following the play's development as it marches towards its opening night on February 3. Next up is a class that will find us doing some script analysis, hearing from the theater's Literary Manager, getting a design update and viewing some rehearsal.  I can't wait.