The Seafarer at Florida Rep

Just because I love to spend time in dark theaters doesn't mean that I actually enjoy dark theater. You know the type of show I mean. The kind that makes you squirm in your seat as family dysfunction or alcoholic binges or [insert whatever makes you cringe] plays out on stage.

And while Florida Rep's "The Seafarer" is a show that makes ordinary family dysfunction fueled by too much wine look like the stuff of happy memories, the quality of the acting drew me in enough to make me come back after intermission. And I'm glad I did. Although this play about a group of friends gathering for a friendly game of poker and a holiday libation is definitely dark, the production was well done. And as a bonus, artistic director Bob Cacioppo led a surprise talk-back with actors James Clarke (Sharky), Graham Smith (Richard) and Peter Thomasson (Mr. Lockhart). Here's a bit of what they talked about.

On dialect -- Unlike the young actors I watched last week at Asolo Conservatory, these guys are old pros at adopting different accents. And so the services of Florida Rep's dialect coach were not required. The actors did confess, though, that it becomes harder to speak in dialect (and, for that matter, to remember lines) as they get older.

On playing a blind man -- Smith was very believable in his role as a blind codger who uses an upside down golf club as a cane. Smith's research revealed that the newly blind move around more than people who've been blind for a long time. This fact made it easier for him to play Richard, who lost his sight only a couple of months prior to the events played out onstage. Smith found it challenging, though, to overcome his natural instinct to connect with other characters by making eye contact.

On the role played by alcohol (which is consumed in copious amounts) -- In theater as in life, a bit of alcohol can ease the way. Smith enjoys playing roles in which the characters are drinking because it gives him the opportunity to over-act (or, in this case, to speak just a wee bit too loudly). Clarke, just back from two months in Ireland, talked about how meeting friends for a pint or a harder libation is an integral part of the way the Irish communicate.

On language -- While the use of profanity didn't even register with me, one audience member noted that another theater-goer counted the number of times the word "f**k" was uttered (73). Cacioppo said Florida Rep has never sanitized a script, but noted that the information on Florida Rep's website indicates that the show is for mature audiences only. 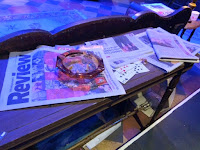 On theater in the round -- When Janice and I sat down, the set was so close we literally could have used this table to hold our beverages. Cacioppo had originally slated this show to play on the main stage, but realized the play would work better in the more intimate setting of Florida Rep's ArtStage Studio Theater. Good call! He pointed out that the staging for theater in the round has to take advantage of the "sweet spots" on the stage - the corners from which most of the audience can see the actor's face. (This is something I'll notice in the future.) One audience member commented that even when Clarke's back was to her, she could see the tension in his back and enjoyed this different perspective. Acting at its finest.

On casting -- Cacioppo is in charge of casting for all shows, and this was an easy one for him. Clarke, Smith and Thomasson, as well as Craig Bockhorn in the role of Ivan Curry, were cast based on Cacioppo's knowledge of their work. Approximately 25 actors auditioned in New York for the role of Nicky Giblin, with William Zielinski winning the part. One audience member noted--with apologies to Thomasson--that his appearance was perfect for the role of Mr. Lockhart (who is the human manifestation of the devil).Thomasson responded with a, well, devilish grin.

The "Seafarer" is playing at Florida Rep through December 13th.
at December 03, 2015