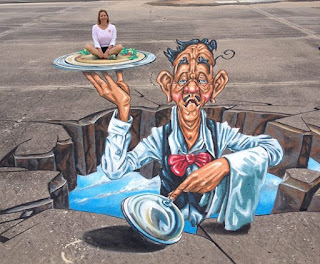 I've been looking forward to this year's Sarasota Chalk Festival since my first Festival experience last year.  The creativity of these artists -- who travel from around the world to participate -- is phenomenal.  And this year I think I did it the "right" way by attending on both Friday and Sunday.

On Friday, we had the chance to talk with the artists as they were working on their creations.  (While some of the artwork was done, most of it was underway.) Perhaps the most interesting conversation I had was with Gary Palmer, an artist from Venice Beach, California. When I asked how he got into the ephemeral genre of chalk art, he said he once saw a group of Tibetan monks create a sand mandala in honor of a visit by the Dalai Lama. Once the ceremony was completed, the sand was swept away into the ocean. While chalk art doesn't carry the same spiritual connotations as sand mandalas, it does force people to focus on the moment. To Palmer, that's all too rare in our commercially-oriented society.

Many of the artists were still at work when I returned on Sunday, but they were much less chatty with a deadline looming. It was great fun, though, to see how works had progressed from Friday to Sunday. And I loved the number of interactive opportunities to enjoy the art.  Artist Ilona Fries was doubling as photographers for spectators, lining us up to enjoy her tropical libation. Serious fun.

Before the Festival began, I had the pleasure of writing a feature about it for Florida Weekly.  It was so much fun to chat with founder Denise Kowal and artist Lori Escalera about the Festival that I thought I'd share the article here.  (Besides, it's an opportunity to include lots of pictures of this year's artwork, although there are way too many to include here!) 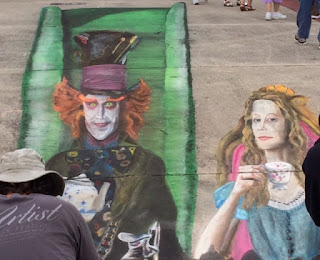 Eat, Drink and Be Merry at the Chalk Festival
By Nanette Crist, Florida Weekly Correspondent

On Nov. 9, the Sarasota Chalk Festival will once again open its gates in Venice. Artists from more than 30 countries, including Bosnia, China and Peru, will create artwork that will wash away with the next rain.

The Festival adopts a theme each year to spark participants’ creativity. This year’s artists and attendees are invited to “Eat, Drink and Be Merry.” 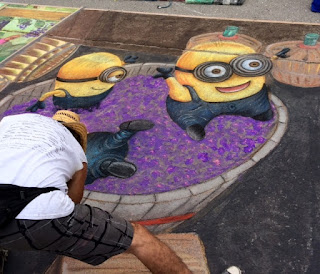 The Sarasota Chalk Festival was established by Denise Kowal in 2007 with 22 artists creating pavement art in Burns Square. Only three of the participants had any prior experience chalking. The Festival has grown exponentially since then and now welcomes hundreds of chalk artists, both professional and amateur, to Southwest Florida each November. 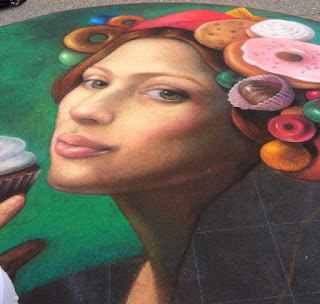 Ms. Kowal attributes the popularity of the Festival to visitors’ fascination with watching works of art come into existence. It’s an accessible form of performance art.

“Everyone can go to a museum and see finished artwork,” Ms. Kowal said. “The Chalk Festival is a unique opportunity to see the process of creation from beginning to end and to understand the artists' excitement and struggles in creating their work.”

And struggle they do. Chalk artists spend innumerable hours on their hands and knees creating their masterpieces. Inevitably, they find themselves at the end of the day with sore backs, stiff shoulders, scraped knees and covered in chalk dust. 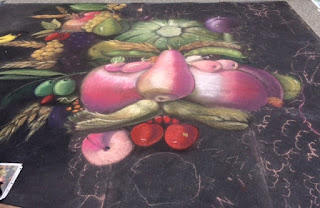 California artist Lori Escalera is a Festival regular who says the end product far outweighs the aches and pains. Despite two hip replacements, Ms. Escalera continues to participate in chalk festivals around the world. She thrives on sharing both her completed art and her creative process with festivalgoers. Plus, she said, creating in the midst of an artistic community is a nice change of pace from the solitary life of a studio artist.

Pavement art dates back to 16th century Italy, when artists—known as madonnaris--would create temporary artwork on the streets using tile, coal and chalk. The name comes from the artists’ frequent depictions of the Madonna and other religious figures. 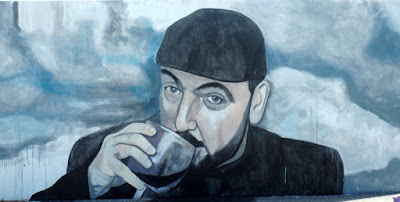 The most frequent question posed to current day madonnaris is why create artwork with such a short lifespan. (A rainstorm destroyed last year’s pavement art before the Festival was even over.) To these artists, the ephemeral nature of their work is an important aspect of the genre.

“You can’t think about chalk art in conventional visual art terms,” Ms. Escalera said. “It’s a process, an experiential way to enjoy art. Going to a chalk festival is more like an outing to the theater or a ballet than a visit to a museum. You can only recreate what you’ve seen in your memory.”

While the Festival will be chock-full of amazing creations, the anamorphic—or 3D illusion—pavement paintings may well be the most awe inspiring. In 1984, Kurt Wenner invented this artistic genre, which builds on the Old Masters’ use of perspective to create the illusion that figures are rising from or falling into the ground.

At last year’s Festival, artists used Mr. Wenner’s design to paint a 3D illusion megalodon shark measuring more than 22,000 square feet. Festivalgoers climbed a viewing tower from which they could peer down into the shark’s gaping mouth. The work secured a Guinness World Record title as the world’s largest work of anamorphic pavement art. (The title has since been lost to a 28,000+ square foot pavement painting in Qingdao, China.)

Mr. Wenner will be onsite this year to instruct more than 90 artists in the creation of his anamorphic “Feast of the Gods.” Bringing the feast to life—from gridding to the last brushstroke--will take a minimum of eight full days. When the work has been completed, the hope is that Venice will once again be the home of the world’s largest 3D illusion painting.

More than 30 large scale 3D illusion works will be created in addition to the “Feast of the Gods.” Art lovers are invited to watch the installations take shape from Nov. 9-12. All 3D works will be completed by Nov. 13 when the Festival fully opens. The megalodon shark, which was created using house paint rather than chalk, will be on display as well.

In 2011, the Festival expanded to include vertical works of art, known as “street art” in the vernacular. The inclusion of street art seemed both a natural extension of the Festival and the perfect accommodation for chalk artists who no longer can spend the time on their hands and knees required to create large scale pavement art. While artists chalked their art on buildings in earlier festivals, plywood panels now serve as their canvases.

This year’s Festival will introduce the “Seniors Going Vertical” program. A large cube will be constructed from four 8’x20’ plywood walls just waiting to be covered with chalk art, graffiti, spray painted stencils and splatter paintings. Materials and safety gear, including protective glasses and smocks, will be available to enable spur-of-the-moment participation.

When asked who qualifies as a “senior,” Ms. Kowal said the concept was an event for people aged 60 and higher. Attendees will determine their own eligibility. 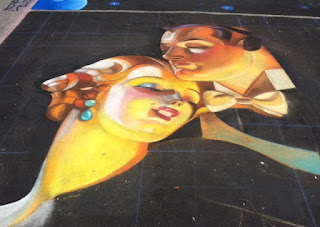 The economic impact of the Festival is significant. Extrapolating from a 2010 impact study, the Festival is expected to bring $6-$10 million of revenue into Southwest Florida.

While Ms. Kowal is delighted with these results, she considers the economic benefits “icing on the cake” (pun intended). “The main purpose of the Festival,” Ms. Kowal said, “Is to bring people together to share an amazing cultural experience they will talk about for years to come.”

With the Festival line-up Ms. Kowal and her army of volunteers have put together, achieving this goal seems inevitable.  Now we just cross our fingers for no rain.