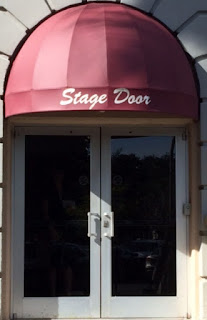 There's always a bit of a thrill using the Stage Door to enter the world of the FSU/Asolo Conservatory. Sure, it's just a canopy with writing on it, but it makes me feel like a theater insider. Besides, sitting in on one of the Conservatory students' showings is always interesting and fun.

The kick-off session for this year was a window into the world of voice training. When we entered the room, the first year students were lying on a large cushioned mat that you'd typically find in a gym.They were in a variety of yoga-like positions and began to work on their "tremor" training once we settled in. It was a bit disorienting to see the students shaking as if possessed (particularly the woman with her legs in the air making--well--orgasmic noises), but it's all part of the process of teaching the students to connect with their breath and their impulse.

Instructor Patricia Delorey explained that Fitzmaurice Voicework provides the basis for this part of the curriculum. (To read more about this program, including the "destructuring" exercises we watched, click here.) Students typically hold each position for 10-15 minutes while working on their breathing and making "breathy fluffy sounds" that help them find the connection to their stage voices. Eventually, Delorey instructed the class to  move into "an approved position of rest." With that, the first year students were done and the second years took over the mat.

The Conservatory students just wrapped their first production of the season -- the hilarious double bill of "The Actor's Nightmare" by Christopher Durang and "The Real Inspector Hound" by Tom Stoppard. Delorey noted that the second year students' curriculum is organized based on production requirements. In this case, the actors all had to speak with British dialects (which they did to perfection). Delorey and the students walked us through their training to learn "RP" or "Received Pronunciation). RP is the Standard English accent in the UK, with the word "received" meaning "as heard." 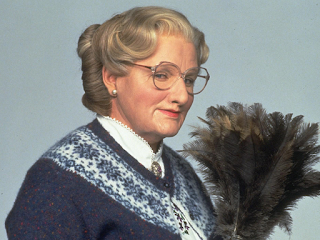 The students listened to "signature sounds" and learned how to shape their mouths and where to place their tongues to replicate them. Then they turned to Paul Meier's book "Accents and Dialects for Stage and Screen" and his accompanying free website IDEA (International Dialects of English Archive). The website contains audio clips of people around the world speaking English -- and sharing their backgrounds to help students with the context. Playing a Bermudian male?  Click here for a sample. An Indonesian or Australian woman? A Salvadoran male? IDEA has it all. The goal is to sound authentic rather than a stereotype (unless, of course, the role calls for it, like Robin Williams in the wonderful "Mrs. Doubtfire.")

Transcribing sentences into British dialect is another component of the students' training. (The sample sentence seemed a bit ironic with Thanksgiving feasts looming.) Before working on scenes for class, the students would transcribe their dialogue.

Finally, the students paired up and performed excerpts from the scenes they'd been working on from a Harold Pinter play. It was funny to hear British accents coming from the students as they sat on the mat in work-out clothing. And I loved the fact that a couple of pairs got the giggles halfway through.  It was a reminder that these actors are just kids training in a craft they love.

This Thanksgiving, as always, I'm thankful to have the chance to take a peek into their process.