Inside Asolo Rep: West Side Story 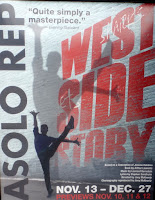 I have somehow made it well into my adult life without having seen "West Side Story." Since I don't actually live under a rock, I of course have heard a lot of the music (and am consistently moved by the beauty of "Somewhere.") And I saw "Jerome Robbins' Broadway" when I lived in New York, which included the wonderful "West Side Story Suite" of dances. But I've never seen an entire performance from start to finish. That's all about to change when Asolo Repertory Theatre kicks off its 2015-2016 season.

I was already looking forward to filling this gap in my cultural resume when an email hit my inbox about an "Inside Asolo Rep" panel discussion with director/choreographer Joey McKneely and set designer Lee Savage. I set my car on auto-pilot and headed up to Sarasota. It was a real treat.

Joey McKneely brings a 25 year history with "West Side Story" to the production. He was first introduced to Jerome Robbins as a 19 year old dancer when he was cast in "Jerome Robbins' Broadway."  He shared that he had no idea who Robbins was; he was just happy to dance. McKneely discovered that his body was able to do what Robbins wanted it to do. (I love the way he talked about "his body" as if it were a separate being.) As a result, he was featured in a number of the dances, including the Suite. The experience, he said, was about "living inside the choreography," and it is this all-encompassing feeling that he hopes to instill in his cast.

McKneely's transition from dancer to choreographer was met with accolades. He received Tony nominations for his first two shows--"Smokey Joe's Café" and "The Life." But it's "West Side Story" that serves as the signature piece of his career.

In 2000, McKneely was invited to reproduce Robbins' choreography for a production of "West Side Story" at the La Scala Opera House in Milan. As he said in an interview with Broadway.com, "All of a sudden it wasn't just the dance steps. I had to understand the entire script...There was now all of Mr. Laurents’ rich character history and emotional plot to inform the choreography. Diving into each scene made me understand where the dances came from, and vice versa."  Since then, McKneely has directed productions of the play around the world, including Laurent's 2009 revival in New York. (To read the entire Broadway.com interview, click here.)

Listening to Lee Savage's approach to set design was equally fascinating. Savage's goal was to "try and forget what I've seen, heard and read about the play and bring something current to the production." He talked about the importance of understanding the needs of the choreography before beginning to think about the set. (Interestingly, McKneely said he felt the production could be done in a black box.)

The two men had an easy conversation led by dramaturg Lauryn Sasso.
To McKneely, the streets of New York are a character in the show. "The city is the witness, judge, jury and survivor," he said. "It's what they're fighting over." Both men envisioned a set that was unique, not just bricks and a couple of fire escapes.

Savage built on "the conflict and tension in the show, the sense of pending disaster." It's a realistic space, but tilted five degrees to add a feeling of unease.

Costume design is also an integral element of the production. McKneely didn't want a 1957 look, believing that poodle skirts and t-shirts with cigarettes in a rolled shirt sleeve would date a show whose themes of racism and conflict over the status quo are relevant today. The Jets will wear black and white and gray which, in part, is a reference to the way we see the past. The Sharks' clothing will include pops of reds and blues as they introduce color into this world in two ways.

The young cast members -- aged 16 to 26 -- have told McKneely they can't feel the hate imbedded in the play. While encouraging in a broader sense, McKneely has urged them to give themselves over to the characters in order to tell the important lessons of "West Side Story."

Hearing McKneely's and Savage's perspectives has made me even more eager to see "West Side Story." The show runs from November 13-December 27.  Click here to get tickets and to read about the rest of Asolo Rep's season, which continues to explore the theme of the American Character.
at November 09, 2015