After spending many hours in Edinburgh sitting in dark theaters, I was ready to have a more hands-on experience.  The Maryland State Fair seemed like the perfect opportunity.

Charlie and I arrived in the blazing heat of the late afternoon.  I had forgotten that fairs aren't only about the animals.  We made our way through the tilt-a-wheels and shooting galleries in search of our first stop: Swifty Swine Racing and Swimming Pigs. The "race track" was a traditional oval, with four starting gates for the contenders.  Since pigs aren't known for their speed, I wasn't surprised that the break away side of the track was only the length of the transport carrier.  You might wonder--as I did--how they motivate the pigs to run.  Would there be the equivalent of a rabbit that greyhounds chase?  Nope.  The "prize" for the fastest pig was an oreo cookie on a silver platter.  (Nabisco would be proud.)  It was quite adorable--not to mention hilarious--to see the pigs race around the track, although I think "sauntering" is actually a better descriptor of their speed.

Then it was time for the main event:  Swiney, the swimming pig. The goal was for Swifty to swim the length of an eight foot trough.  He mounted the platform and immediately relieved himself of his lunch (presumably to enhance his speed).  It's all part of the fun at being up close and personal with farm animals.  Swifty did eventually dive into the pool and swim the distance to cheers from the spectators.  After the event, Swiney's fans had the chance to cuddle him like a baby for a nominal fee.  (For the record, he made some pretty weird noises that sounded nothing like "oink.")

From there we were off to the Cow Palace.  Cows are incredibly patient creatures.  Not only do they take the time to chew their food twice before digesting it (hence the expression "chewing their cud" -- trust me when I say you don't want to think too much about this), but they happily hang out while their owners shave them in preparation for competitions.  Daybreak, however, went above and beyond as fair visitors tried their hands at milking her.  It was actually pretty easy once I got over a bit of fear at massaging her massive udder. I even managed to get some milk in the pail.  I was interested to learn that when Daybreak is milked by machine, her output ranges from 40-70 gallons in ten minutes. She was clearly going to need a good milking once her shift was over. They sent me off with a coloring book and crayons (hmm, was that a clue that this was supposed to be for kids?) and a cold half pint of milk. 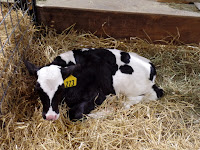 We also had the chance to see a beautiful two week old calf, with visitors voting on her name.  As a Game of Thrones fan, there was little doubt my vote would go for "Daenerys Cowgarian."  Charlie cast his for "Moolissa."

The most amazing part of the fair was the birthing area where we saw two sows delivering babies. The first mother gave birth to17 piglets over the course of the day.  It was incredible to see the little ones slide out of her, take a few minutes to get their legs under them, and make their way over to mama's teats.  When we arrived, mama pig had already given birth to 13 piglets that were sucking vociferously away.  Suffice it to say that the newest family member had to work pretty hard to get through the crowd. We could literally see the piglets plump up once they got some milk in their bellies.  As corny as it sounds, I felt like I had witnessed a miracle, and we kept returning to the pen to see how the piglets were faring. (My affinity for the pigs did not, however, stop me from having bacon for breakfast the next morning.)

As we left the fair, the rides and games that were so unappealing on our way had taken on a magical quality when lit up against the night sky. The outing had been a wonderful change of pace from everyday life.  If you have the chance to check out a fair next summer, don't miss it!