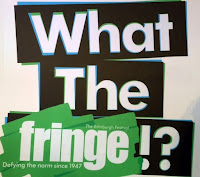 EdFringe 2015 is now in the books.  Overall, Wendi and I feel we did a good job of choosing the 70 shows we saw. (That's not to say there weren't shows that made me painfully aware how long an hour can be if you aren't willing to walk out of a small performance space.) The question, of course, is how to keep track of our reactions to that many performances.  Luckily, Wendi and I have a sharply honed five star rating system, with five stars given to shows that are well-written, well-acted, creative, and among the best we've ever seen.  No show received the coveted five star rating from either of us this year, but we still saw a lot of great theater.  Here are my top five shows:

Fake It 'Til You Make It by Bryony Kimmings and Tim Grayburn.  This show about clinical depression in men packed an emotion wallop.  Kimmings and Grayburn are a real-life couple who are expecting their first child.  Several years into their relationship, Kimmings discovered that Grayburn was on medication for clinical depression.  Grayburn hadn't shared this crucial fact with her because he feared it would made him seem less of a man.  The couple struggled with the issue, weaning Tim off his medication, living together through a break-down, and coming to terms with what it means to their relationship.  A performance artist, Kimmings' reaction was to make a show about the issue, and she persuaded Grayburn to quit his job as a media exec and go on the road with her.  His conditions:  He wouldn't look "you lot" (meaning the audience) in the eye; he wanted to play the guitar in the show; and he had to look like a real man. Throughout the show, which was alternately poignant and funny, Tim wore hats and miscellany on his head to maintain his emotional distance. When he finally revealed himself fully to the audience, I could feel how much it took for him to do so.  At this point in the show, the couple described the symptoms of depression.  Tim commented that he thought they could just list the symptoms but that Bryony insisted they make it a dance.  (Her look to the audience said "Duh" loud and clear.) The couple's ability to not only cope with Tim's depression but to joke about their different approaches to life left no doubt in my mind about the strength of their partnership.  When they built a house onstage to the tune of The Carpenters' "Close to You," I totally lost it.  The show was brave and personal and creative and touched an emotional chord.  And I loved the fact that the couple stand outside the theater to greet audience members as they are leaving, many of whom share their own stories with the pair.  To watch a clip from the show, click here.  My score:  4.5; Wendi's score: 2.5

Lungs by Duncan Macmillan (Paines Plough Theatre).  Last year's Every Brilliant Thing by Duncan Macmillan was one of my EdFringe favorites.  We passed on Lungs, though, because the description didn't appeal to me.  ("In a time of overpopulation, erratic weather and political unrest, what exactly are the right reasons [to have a child].")  I was envisioning a rant about the environment and other socially conscious factors against having a family. The show was back this year after winning lots of awards, so we decided to check it out.  It was fabulous. Macmillan has a remarkable ability to address serious issues with a good amount of humor.  And while the play does touch on the environment, etc., it delves into plenty of relationship issues as well.  When you add two superb actors -- Sian Reese-Williams and Abdul Salis -- the result was a memorable production.  My score:  4.5; Wendi's score:  2.5.

Ross & Rachel by James Fritz.  Fans of the TV show "Friends" might have wondered what happened to Ross and Rachel once the series ended.  I can say with assurance that this one woman play is not where the writers would have gone with the story line.  While Ross and Rachel have ended up together, it is definitely not happy-ever-after.  Rachel chafes at losing her identity and Ross' characterization of her as belonging to him.  When he develops brain cancer, she's secretly relieved that she will soon have the opportunity to be on her own without the messiness of a divorce.  Then Ross proposes a joint suicide pact.  They'll sit in a tub and cut their wrists and leave the world together.  This show was one hundred percent drama and incredibly intense.  It left me breathless in the way the best theater does.  Actress Molly Vevers deservedly won several awards for her performance.  As a side note, Wendi never watched Friends, so had no idea about the back story!  My score:  4; Wendi's score:  3.5.

Sunset Five by DugOut Theatre.  This devised theater work was one of the most all-around enjoyable of this year's Festival.  (The term "devised" theater refers to a work developed collaboratively, often by the actors.)  When we entered the theater, five actors were sitting behind mikes.  One actor was wearing athletic clothes with shorty shorts and alternately playing the flute and the fiddle; another was dressed in cowboy attire and strumming a guitar. What was going on?  A pub that ran weekly quiz games was about to go under because the owner couldn't pay the mortgage (held by the disreputable owner of the local casino).  The owner and her quiz team banded together--each using his or her special skills--to rob the casino.  (The guy in the athletic clothes was particularly hilarious as he worked to make his abilities to do gymnastics and roll up into a ball relevant to the endeavor.)  If this description sounds silly, it was, but in the best possible way.  We laughed and cheered for the home town team to prevail over corporate greed.   Serious fun.  My score:  4; Wendi's score: 4.

Butterfly by Ramesh Meyyappan.  This wordless show was one of the most moving of this year's Fringe.  A kite maker becomes involved with a lepidopterist (a scientist who studies butterflies).  Her former beau snaps and rapes her;. she has a child.  (The child is depicted by puppets, which I loved; Wendi found them disturbing.) The show explored feelings of love, loss and hope in a lyrical way, with beautiful accompanying music.  I was fascinated to learn that the playwright--who was also one of the actors--is deaf.  Knowing this made the performers' physical conveyance of their emotions even more impactful.  To watch a clip from this show, click here.  My score: 4; Wendi's score: 2.5.

EdFringe is the theatrical equivalent of a smorgasbord and more than a little addictive. And crazy as it might sound, now that I've caught up on my sleep, I'm thinking about next year...